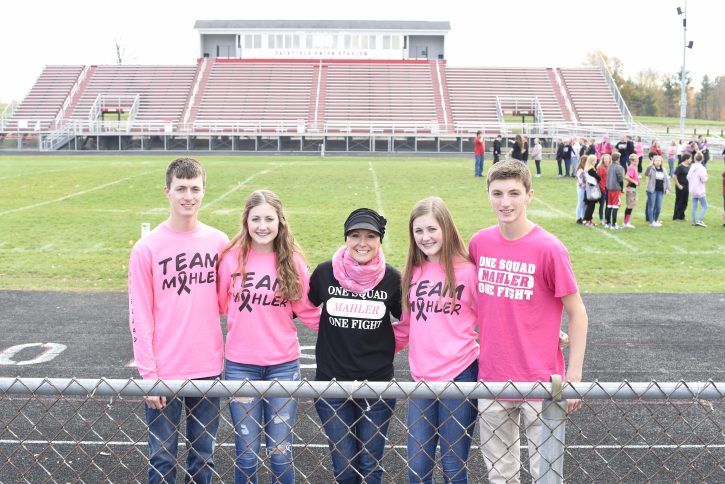 Cheering on the Fight Against Breast Cancer

Students at Fairfield Union have been wearing a lot more pink than red and black this year, and no one is more surprised than the person who inspired it all – middle school librarian Traci Mahler. When Traci was diagnosed with breast cancer right before the start of the school year, she decided to be upfront with her students about the battle she was about to face.

Within days, she noticed that students were not only sympathetic toward her diagnosis, but also taking an active approach to help her and other patients in her situation. 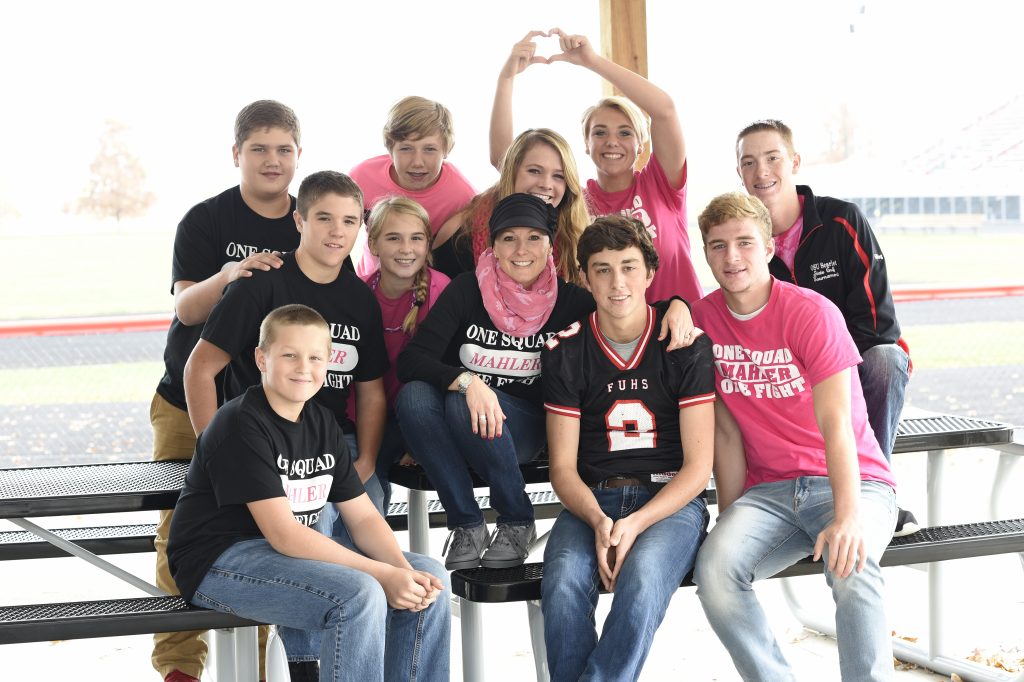 “Some of the kids designed shirts, they had a Pink Spirit Day, they put up signs all over, they started raising money,” said Traci, who has four children in the district and one in college. “This isn’t something someone is telling them to do and it isn’t just a handful of kids either – it’s been two whole buildings.”

“One of the things I love about our community is how ready we are to support our family, friends and neighbors when something happens,” said Amanda Strigle, Team Leader for the FMC Foundation. “Traci’s story and strength are incredible and she’s a reminder that we are all connected. When Traci was suddenly diagnosed with cancer, it became real to these students and they wanted to take action. Because of their willingness to honor Traci in so many creative ways, cancer patients in our community will continue to have access to great resources and care, close to home.”

The “Team Traci” movement started in September when middle school students Kody Beal and Tucker Thomas designed shirts for their classmates. Kody’s shirt says “Team Mahler” and Tucker’s shirt says “One Squad, One Fight.” Both slogans have since become rallying cries for students to stand up and support the fight against breast cancer.

“It started at the beginning of the school year and hasn’t slowed down,” Traci said. “In fact, it keeps gaining momentum.”

Many of the students have shown support in their own way: Trevor Thomas, 7th grade, shaved his head shortly after Traci lost her hair. Eighth-graders Jeff King and Josh Starner encouraged other 4-H students to donate the proceeds from their livestock sales to the Cancer Care Fund in Traci’s name. Emma Leising, sixth grade, started sewing “port pillows” for cancer patients and is now looking to start her own business. Athletes Camden Moellendick, Stacie Noble, Parker Ruff, Brent Gulling and Hayden Price have coordinated Pink Spirit rallies, and raised money in the fight against breast cancer.

“Every time I see Traci, I tell her she makes me a stronger person,” said Parker, a soccer player who came up with the idea to dedicate the soccer season to Traci. “When I see her in the stands, it makes me more excited and less nervous and stressed.”

Watching Traci’s battle with cancer, the students say, has given them a new sense of purpose and made them more aware of the struggles that cancer patients face.

“After one of my games, I saw her in the parking lot talking to someone and thought, she’s going through all of this, the least I could do is let her know I’m thinking about her,” said Hayden, a senior soccer player. “I hugged her and told her she’s in my prayers, that she always was and still is.”

Stacie, a senior cheerleader, said Traci’s cancer battle has given her a different perspective on her own life.

“Sometimes you don’t want to do something because it’s not fun or you don’t like doing it, but then I think about Traci – she doesn’t want to do chemo, but she has no other choice,” Stacie said. “Sometimes it helps me remember that I’ve got it good now.”

Traci said the support of the students has meant more to her than the support from anyone else, in part because it was so pleasantly unexpected.

“I heard one boy say he would love to go on a field trip to the Cancer Resource Center at FMC so he could make someone else feel good too,” Traci said. “It makes it extra special coming from younger people. I started this job thinking I could make a difference. I never thought these kids would change my life.”