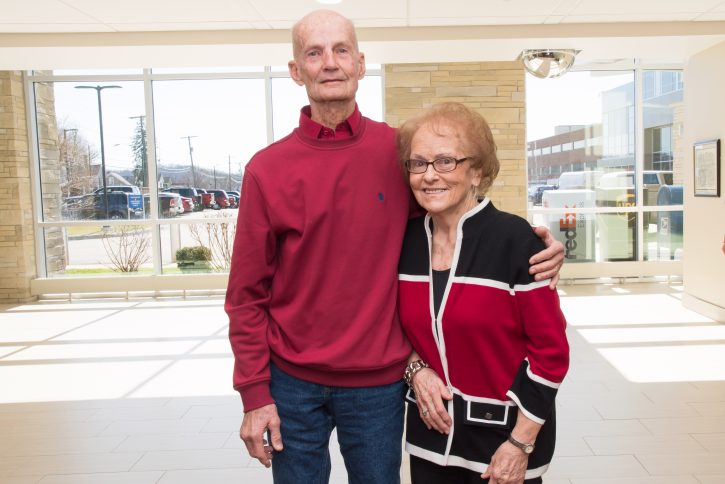 One woman’s story about being in the right place at the right time.

Darlene Winland doesn’t like to think about what might have happened had she not been in Lancaster, Ohio when she experienced a heart attack on Nov. 1, 2017.

Had her hometown team not been competing in the division IV volleyball tournament, had the staff at Lancaster High School not been equipped to respond to a cardiac emergency, and had she not been transported to Fairfield Medical Center, Darlene’s story might have had a much different ending.

“I was in the right place at the right time, there is no question about that,” said Darlene, 79, of Monroe County, OH.

Darlene had no inkling prior to Nov. 1 that trouble was brewing with her heart. Over the years, she’d had routine check-ups that always came back normal. She didn’t feel tired or winded. She led a healthy lifestyle and wasn’t overweight.

In fact, on the day that she unexpectedly went into sudden cardiac arrest, she was feeling perfectly fine. Sitting in the Lancaster High School gymnasium with her husband, LaVerne Winland, and a group of friends from Monroe County, she cheered on the Monroe Central Seminoles as they played against Fairfield Christian Academy. When the game ended, she stood up and began to make her way down the bleachers. 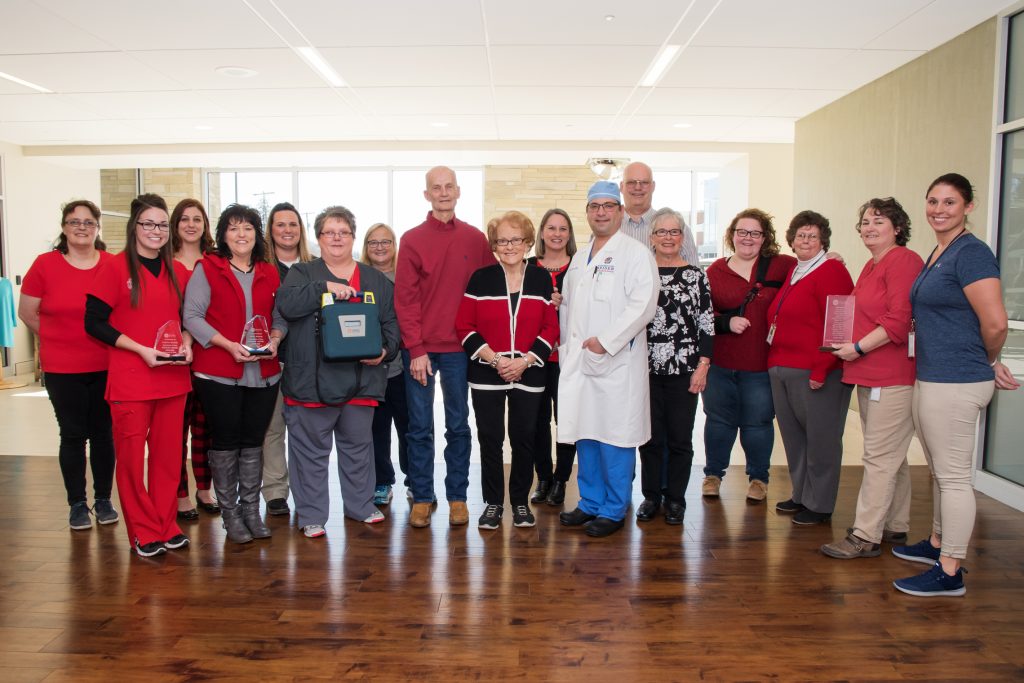 The last thing she remembers was reaching out for her husband’s hand.

“All of a sudden, she just fell down,” LaVerne said. “She didn’t have a pulse. I cried out her name, but she didn’t respond.”

“The absence of life in her eyes is something I will never forget,” Merna said.

It took just seconds for bystanders and Lancaster City School staff to spring into action. Darlene’s neighbors Gail and Laken Zwick, who are both nurses, immediately began CPR with the assistance of LCS athletic trainer Leigh Spring, LCS health assistant Shari Sarensen and LCS athletic department secretary Audrey Lee. At the same time, LCS health assistant Amy Beck ran to get one of the school’s AED machines, which had been donated to the school by FMC, while LCS Resource Officer Dep. Jeff Dixon called 911. Numerous other employees rushed forward to assist in any way they could while Darlene’s family and friends stood nearby and did the only thing they could do – pray.

“As a site manager, you hope that nothing such as this occurs during an event you are hosting, but you also realize that with the large number of people in attendance at such events, it’s not a question of if something happens, but when,” said Pam Bosser, LCS athletic director. “I am very proud of the Lancaster High School staff that worked the event and pleased that their readiness helped to save Darlene’s life.”

Darlene was transported to Fairfield Medical Center, where cardiothoracic surgeon P. Aryeh Cohen, M.D., determined that she would need to undergo a triple bypass surgery. Darlene and her family and friends were filled with fear and uncertainty as they prepared for a long hospital stay – but they said the staff at FMC did whatever they could to make them feel at home.

“I was a complete stranger to them and they were strangers to me, but everyone I came in contact with treated me like a family member from the moment I arrived,” Darlene said. “The caring, the compassion … it was unbelievable.”

For 21 days, Darlene’s friends and family made the long trek to Lancaster to be by their loved one’s side. They remember the little things that FMC staff did to make that time in their lives easier, such as bringing in a pizza for a mini “pizza party” or ensuring that Darlene’s faith-based needs were met with the help of the hospital’s chaplains.
“From the moment we walked through the doors, they made us feel like we were the only patrons in the hospital,” Merna said.

Darlene’s son, Randy Winland, said he was impressed with the professionalism of the staff.

“Dr. Cohen was upfront from the very beginning that, if we felt we could get better care somewhere else, we shouldn’t be afraid to do that, that it was ultimately our decision,” Randy said. “We never felt the pressure to stay at FMC, but we’re very glad we did.”

Randy’s wife, Sandy, agreed. “Simply by doing their job, the nurses and doctors convinced us that she would get good care right where we were,” she said.

Darlene said she personally felt like the staff went above and beyond to ensure that her needs were met.

“They listened to me; I never felt like I was shoved aside or not a priority,” she said.

Today, following extensive cardiac rehabilitation at facilities in Marion and Marietta, Darlene is back home and doing much better. In February, she returned to Fairfield Medical Center to recognize the LCS staff who provided emergency assistance to her that day, as well as the FMC staff who cared for her in the weeks that followed (see box on next page).

“There were times in the hospital when I wondered if I would ever get to go back home,” Darlene said. “On those days, I would try to look back and see how far I’d already come. I wouldn’t be where I am today without the staff at Fairfield Medical Center.”