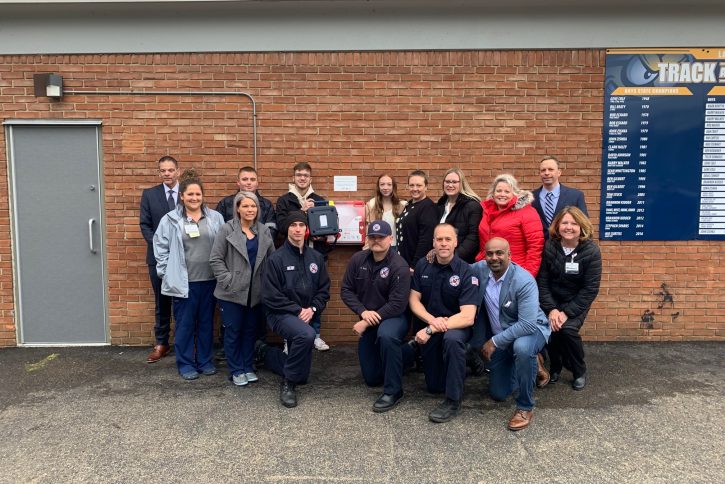 A State Highway Patrol Trooper was posthumously honored with a Great Save Award from Community Heart Watch after he helped save the life of a person who suffered cardiac arrest while driving. The award, which is given to individuals who provide lifesaving intervention in situations where someone is experiencing cardiac arrest, was presented during a special ceremony on April 18 at Fulton Field in Lancaster.

Trooper Donald “Andy” Ward was driving down State Route 37 near Rising Park in Lancaster on June 9, 2021, when he observed a car veering toward the center of the road. To prevent the car from accelerating into an embankment, Ward parked his car in front of it and called for a squad. As he approached the car, he noticed that the driver appeared to be experiencing cardiac arrest. Acting quickly, Ward navigated the situation and removed the driver from the car. Three individuals who happened to be driving on State Route 37 when the incident occurred – Portsmouth medics Olivia Crawford and Charles Smyers, and FMC nurse Erica McDaniels – rushed to Ward’s aid and helped perform CPR on the driver until medics arrived on the scene. The driver was transported to Fairfield Medical Center and was later discharged.

Less than three months after his heroic act, Ward passed away. His wife, Brenda, and his children, Megan and Andrew, accepted the Great Save Award on his behalf. Brenda Ward noted during the ceremony that it had meant so much to her husband to have assisted someone in their time of need. Great Save Awards also were presented to Crawford, Smyers and McDaniels for their lifesaving intervention.

In addition to the Great Save Award, an AED was placed at Fulton Field in Trooper Ward’s honor. His family selected Fulton Field to display the AED because Ward was an avid runner and spent many hours there supporting his children as they ran track.

“While physicians and hospitals often get credit for saving lives, it is truly the efforts of bystanders like Trooper Ward that keep patients alive until EMS arrive to administer more advanced care and get patients to a hospital so we can do our interventions and procedures,” FMC cardiologist Dr. John Lazarus said during the event. “The best outcomes occur when CPR is started immediately and an AED is used within 4-6 minutes of collapse.”

Learn more about Community Heart Watch and how you can save lives from cardiac arrest.