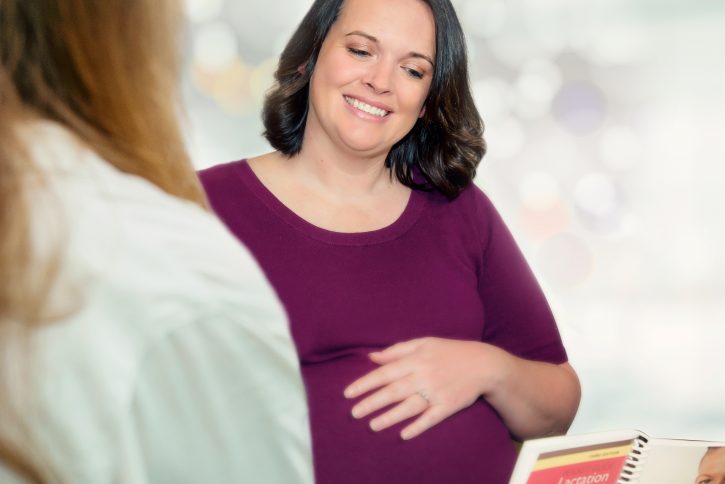 Nausea and vomiting of pregnancy (NVP) is a very common occurrence affecting up to 90% of pregnancies. NVP is often referred to as “morning sickness” but can occur during any part of the day. It is typically not harmful to you or your developing baby, but it can interfere with your daily life, as well as your ability to work or care for yourself and your family.

If you are experiencing symptoms that are not typically associated with NVP, such as: headache, fever, abdominal pain, onset of vomiting after week nine of pregnancy, or an enlarged thyroid gland, your physician may want to rule out other conditions before creating a treatment plan for you.

When Does NVP Usually Begin?

Nausea and vomiting of pregnancy usually begins before week nine of pregnancy. For most women, symptoms go away by week 14 of pregnancy – although some may experience symptoms for several weeks or months. In rare cases, NVP lasts the entire pregnancy.

What is Hyperemesis Gravidarum?

Hyperemesis Gravidarum (HG) is a rare, but very severe, form of nausea and vomiting of pregnancy. It is estimated to occur in less than 2% of pregnancies. Patients with HG may lose 5% or more of their body weight due to severe and persistent nausea and vomiting; this also can lead to dehydration and vitamin and mineral imbalances. If severe HG is left untreated, it can lead to dangerous complications for mom and baby.

Many women with HG require hospitalization at least once during pregnancy to receive medication to stop the vomiting and treatment to restore hydration and nutrients through an intravenous (IV) infusion. Hospitalization may last until symptoms are under control.

The cause of NVP is not entirely known, although the following risk factors have been associated with developing symptoms:

When Should I Call My Doctor?

Call your health care provider if:

Treatment of Nausea and Vomiting of Pregnancy (NVP)

Your physician may recommend some lifestyle and dietary changes for you to try in an attempt to control your NVP without medical intervention. If these are unsuccessful in relieving your symptoms, or if your symptoms worsen despite your efforts, further treatment may be necessary.

What Can I Do to Relieve Symptoms?

Committing to a few lifestyle changes may help prevent or alleviate symptoms of NVP:

Treatment may include medications and/or administration of intravenous (IV) fluids either at home or in a hospital setting. Medications that may be suggested by your provider for NVP may be prescription or over-the-counter, and often include: