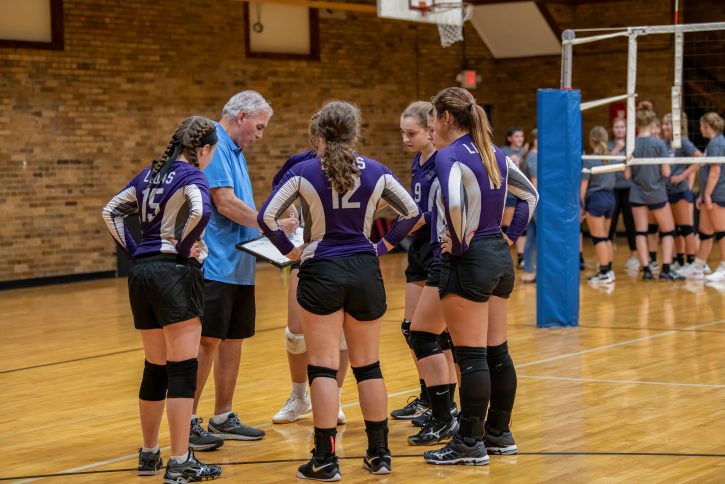 As a girls’ volleyball and basketball coach, Creighton “Mike” Miller likes to begin each new season with an inspirational story.

He talks about a man who has undergone many serious health complications in his life – a rare and life-threatening blood- clotting disorder, heart surgery, E. coli, MRSA, gangrene, a stroke. He explains that everyone has trials they will have to go through in their life, but with strength and perseverance, you can overcome those hurdles. It’s advice Mike knows all too well, because the man in the story is him.

“You could say I’ve been through a lot … but I’m also very blessed,” Mike said. 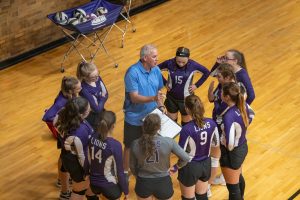 Mike doesn’t look like someone who has spent the past several years in and out of the hospital for various health scares. The retired 64-year-old father of three is full of energy – five times a week, he drives from Lancaster to Granville to coach volleyball at Granville Christian Academy. He loves to spend time with his wife, Debbie, his grown daughters, Megan, Kristen and Katie, and his six grandchildren.

Through all of his health struggles, Mike knows he wouldn’t be where he is today without the staff at Fairfield Medical Center and the care they provided during some of the most difficult trials of his life. “Fairfield Medical Center has been very good to me. The care I’ve received there has always been outstanding, and the nurses – they hold a special place in my heart,” Mike said.

One of those nurses, Kelsey Hintz, RN, BSN, of FMC’s Intensive Care Unit, was among the caregivers who saw Mike through one of his most challenging and recent health scares – a sudden stroke in December 2019.

Kelsey personally knows Mike from the years he spent coaching her daughters in volleyball.

“We don’t often get to see what happens to the patient after they leave us,” Kelsey said. “In Mike’s case, I’ve been able to see his recovery and it’s been truly amazing.”

Mike said the day before his stroke, he passed out at work, hitting his head hard on the marble floor. His colleague called 911, and Mike was brought to FMC for an evaluation.

“They ran some tests, and everything looked good, but when the question came up of whether I should be discharged, the ED doctor surprised us when he told us no,” Mike said.

The attending physician that day was Dr. Jerry Oliaro, DO, FACEP, of US Acute Care Solutions, FMC’s emergency medicine group. Even though Mike’s test results had shown no signs of stroke activity or anything unusual, Dr. Oliaro still had some concerns about what had caused Mike to pass out earlier that day.

“The primary concern I had with Mike on his ED visit was that he passed out for unknown reasons. He has a fairly complicated cardiac history and that was my initial concern,” Dr. Oliaro said. “He may have had some type of a cardiac event or abnormal arrhythmia. Stroke is a possibility, but less common. In addition, he did not have any other symptoms at the time he passed out to suggest TIA (a transient ischemic attack, or mini stroke). That is why admitting patients, such as Mike, is important. There could be a number of causes for fainting, including cardiac and neurologic problems.”

Dr. Oliaro’s decision proved to be lifesaving – at 6 a.m. the following morning, Mike suffered a stroke.

Kelsey, being an ICU nurse and working on the day of Mike’s stroke, was in a position to provide care and support for him and his wife during the stroke alert. “Mike knew me when I went into his room; he said, ‘Hey, kiddo,’ like he always does,” Kelsey said. “But as the hour went on, he was speaking gibberish and had lost movement on one side.”

Mike was suffering from an ischemic stroke, which is caused by a blockage in an artery that supplies blood to the brain. The blockage reduces blood flow and oxygen to the brain, leading to damage or death of brain cells.

As a Primary Stroke Center through The Joint Commission, FMC has a dedicated, stroke-focused program where patients like Mike can be diagnosed and medically stabilized before they are transferred to another facility. Time is a critical factor in stroke treatment; a clot-busting drug known as tPA must be given within 4.5-hours of the onset of symptoms if the patient is to have a good chance at making a full recovery.

As FMC’s stroke response team rushed to administer the tPA, Kelsey stepped aside to sit with Mike’s wife, Debbie, who had just arrived at the hospital. “I brought her food and just stayed with her. I knew that she was frightened,” Kelsey said.

Debbie said the compassion she received from Kelsey in that moment was just what she needed to remain calm and focused. “It was a comfort to have a familiar face, someone Mike knew, who was there with me the whole time,” she said.

Within an hour of suffering his stroke, the tPA had been administered, and Mike was stable enough to be transported to The Ohio State University Wexner Medical Center for ongoing care.

“As all of this was going on, it just didn’t seem real to me. I just couldn’t believe what was happening,” Mike said.

Upon arriving at Ohio State, Mike was whisked into the operating room so the clot could be surgically removed. He recovered quickly and was discharged from Ohio State just seven days later. When he returned to Ohio State the following week for a check-up, the surgeon who had treated him was floored by the improvement he had made.

“He asked, ‘Are you Creighton Miller? Did you just walk in here?’ ” Mike said. “I told him I was and he said, ‘I wasn’t expecting that at all.'”

Mike said he credits much of his remarkable recovery to the immediate and diligent care he received at FMC.

“Had FMC sent me home on the night before I had my stroke, I know my story could have ended much differently,” Mike said. “Had they not responded like they did when I had the stroke, I might not be here today. Kelsey told me, ‘you’ll never know how bad it really was.'”

Kelsey said she is proud of how FMC’s team worked together to save Mike’s life and buy him the time he needed to get to Ohio State for his surgery.

“I remember the teamwork when they were all in there – the helicopter crew, the doctors, the ICU nurses, the pharmacist,” Kelsey said. “Mike would not have had the results he had without that fast action. They saved his life that day.”

Mike would like to dedicate this story in memory to his friend, Del Barr.

Fairfield Medical Center is proud to be recognized by the American Heart Association/ American Stroke Association for our commitment to delivering superior stroke care.

For the third year in a row, FMC has received the Associations’ Get With The Guidelines® Stroke Gold Plus Quality Achievement Award. This award recognizes a hospital’s commitment to ensuring stroke patients receive the most appropriate treatment according to nationally recognized, research-based guidelines that are focused on the latest scientific evidence. FMC additionally received the Associations’ Target: StrokeSM Honor Roll award, which recognizes hospitals that meet quality measures developed to reduce the time between the patient’s arrival at the hospital and their treatment with the tPA.

Do you know the warning signs of a stroke? F.A.S.T is an acronym to help you remember. Together, we can save lives through quick action and awareness. 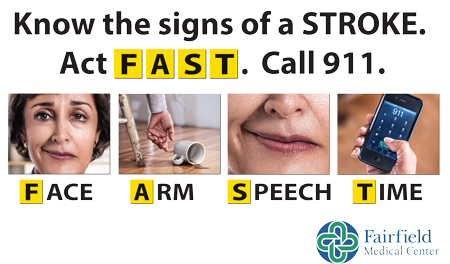