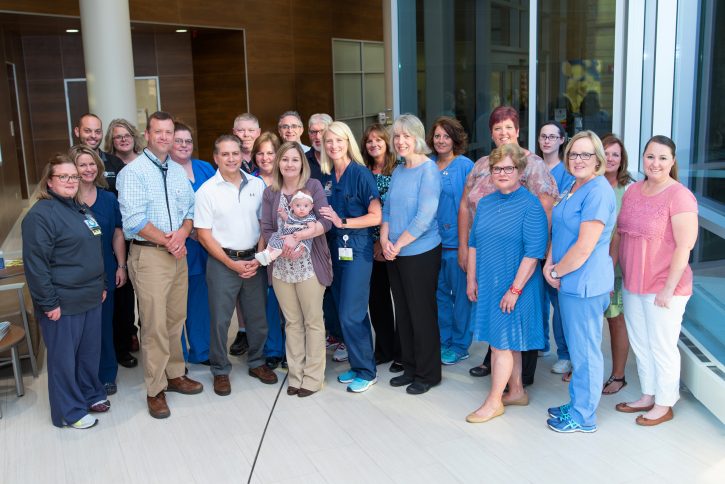 When Eva Payne and Sara Wright rushed into Fairfield Medical Center’s operating room on the afternoon of Feb. 28 to assist OB-GYNs Suzanne Barnhart, M.D. and Sarah Froman, M.D. with an emergency C-section, both nurses feared the outcome was not going to be good.

The patient was Holly Amerine, a young mother who was experiencing a total placental abruption, or a detachment of the placenta (or afterbirth) from the lining of the uterus (or womb). An ultrasound could not detect any fetal heart movement, and Holly was in severe abdominal pain.

Sadly, this was not the first time the South Bloomingville resident had come through the hospital’s Emergency Department while pregnant. Just one year earlier, Holly and her husband, BJ, lost their son, Brody, from the same pregnancy complication that was now threatening to take the life of their unborn daughter.

“Our thoughts were that this poor family was going to have to go through losing another child and how were we going to deliver that news?” said Sara, a labor and delivery nurse and team lead in the Maternity Department.

Yet, there was still a glimmer of hope. As Sara and Eva will tell you, miracles happen every day in Maternity – and they were about to witness one that they would never forget.

Within minutes of being wheeled into the operating room, Holly’s daughter, Carley, was born via C-section at just 27 weeks along. As Dr. Froman delivered the infant, Eva said she witnessed something that will stay with her for the rest of
her life.

“I saw the baby’s leg twitch, and I cried, ‘she’s alive!’” Eva said. “I can’t describe what I felt at that moment. The whole room just came to life when we saw that baby move.”

Against all odds, little Carley Amerine had survived the traumatic experience that had taken the life of her older brother, Brody, just a year earlier. For those who were there to witness her first breath, it was a moment that has remained frozen in their memories.

“We believe every birth on the Maternity floor is a miracle; however, there are special times when you truly realize that miracles do happen,” Dr. Barnhart said. “It happened that day for BJ and Holly, and I am so proud to have been a part of such a wonderful outcome.

Holly, 34, doesn’t know what it’s like to experience a “textbook” pregnancy. When she was pregnant with her oldest son, Travis, 5, she was diagnosed with pre-eclampsia, a potentially dangerous pregnancy condition that is characterized by high blood pressure. Travis ended up being born at 32 weeks, weighing just two pounds.

Five years after welcoming their first son, Holly and BJ decided to expand their family further. Due to Holly’s history of complications, this pregnancy included frequent visits, vigilant blood pressure screenings and routine diagnostics – all of which revealed no abnormalities. The pregnancy, all in all, was uneventful – until week 34.

“I was at work one day, and I was just feeling uncomfortable,” Holly recalls. “I went to lunch with a friend, and then went home early. I called the doctor’s office and they told me to drink cold water and lay on my side since I hadn’t felt the baby move.”

Holly did as she was told, but was soon experiencing terrible back pain. She decided to go to the Emergency Department as a precaution: it was a decision that saved her life.

“They told me I had experienced a silent abruption and my baby was gone,” Holly said. “I had been bleeding internally all day without knowing it.”

Holly remained hospitalized for several days as a result of a blood clotting disorder (D.I.C. or disseminated intravenous coagulation). After receiving four blood transfusions and round-the-clock care, Holly began to recover – and think about the future. While Brody’s death had been a traumatic experience, Holly and BJ hoped they could one day get pregnant again. At their high-risk consultation with Dr. Froman, who is with OB-GYN Associates of Lancaster, they discussed the likelihood of a second placental abruption occuring.

“I met with the Amerines after Brody’s birth. They asked if they should attempt another pregnancy,” Dr. Froman said. “Since Holly had preeclampsia early in her first pregnancy, and a total abruption in her second, she was at higher risk to have either of these events happen in a future pregnancy. However, that risk is not 100%, and we would monitor her closely in a future pregnancy.”

“During Carley’s pregnancy, she and BJ were told to call or go to the hospital if she had any signs or symptoms at all,” Dr. Froman said.

Holly was diligent about checking her blood pressure and reporting anything unusual to Dr. Froman. So when she started feeling sick at work on the afternoon of February 28, she became concerned.

“I checked my blood pressure and it was a normal reading, but my pulse was high,” Holly said. “I remember my arms and legs felt heavy, and I was very hot.”

Holly went to FMC’s Emergency Department. Her pulse had skyrocketed to 175 and doctors initially thought she was suffering from a pulmonary embolism. Holly was wheeled back to the ED and when she stood up, she felt the sensation of blood saturating her clothes.

“I laid down and felt a bulge in my stomach, and that’s when I realized that it was another abruption,” Holly said.

Sara, who was working the Maternity Unit that day, was called down to the ED to obtain fetal heart tones and check on the baby. She began asking questions and immediately became concerned when she learned of Holly’s previous abruption.

“I knew something bad was going on, so I called Dr. Froman, but she was in surgery and couldn’t leave,” Sara said. “She told me to call Dr. Barnhart and when I did, Dr. Barnhart literally came running.”

Holly was whisked upstairs to the Maternity Unit where Dr. Barnhart performed an ultrasound. When it failed to show a heartbeat or movement, the Maternity team jumped into action to prepare the operating room for an emergency C-section. Dr. Froman had finished her surgery and met Dr. Barnhart and the team in the operating room. Eva, the supervisor of Maternity, gently told Holly that they weren’t sure if the baby was OK or not.

“I told her, ‘just stay focused and breathe,’ and she did,” Eva said. “She was able to detach herself from the situation, even when we told her we feared the baby was not doing well. She was in a controlled state.”

Holly said she realized how important it was for her to relay her history of pregnancy and preeclampsia-related complications, even in the midst of her crisis.

“I remember making a conscience effort to remain calm, to clearly communicate my medical history to the nurse,” said Holly.

Holly remembers little about Carley’s actual delivery aside from the staff exclaiming that her little girl – who had been feared dead – was alive and gasping for air. With a winter storm rolling in and no way to transport Carley by helicopter to Nationwide Children’s Hospital in Columbus, pediatrician
Dr. Jennifer Gibson remained by the child’s side to assist with resuscitation until the weather cleared.

It was Eva who got to deliver the miraculous news to BJ. The grieving father was down the hall with FMC Chaplain Jonathan Hanks, who had not left his side throughout the entire ordeal.

A Celebration of Life

After 80 days at Children’s Hospital, Carley is back home and just recently received a clean bill of health. In February, she will celebrate her first birthday.

Holly said she wants to share Carley’s story in the hope that other mothers will understand the importance of paying attention to their bodies during pregnancy and reporting anything unusual. unusual to their physician.

“Trust your instincts – you are the only one who knows how your body feels normally, so pay attention to it and let your doctor know if anything feels off,” Holly said.

Holly also believes everything happens for a reason – even with the loss of Brody.

“I know most people don’t talk about the babies they’ve lost, but the only way the world will be able to get to know him is if I tell them about him,” she said. “Had we not lost Brody, we wouldn’t have known what to watch for with Carley.”

Holly said her recovery from Carley’s birth has been gradual, but she is getting stronger with time. She recently learned that she has a genetic condition that increases her risk for blood clots, which may be linked to her placental abruptions.

She said she is thankful every day to the staff at FMC for the care she has received.

“I am blessed that the abruption happened at FMC,” Holly said. “Everyone worked together perfectly to make sure they didn’t miss a beat. If even one small thing had gone wrong, things may have turned out much, much differently.”

Eva and Sara said they are proud of how so many departments – from Maternity to the ED to Respiratory Therapy to Radiology – worked together to pull off what can only be described as a miracle.

“It puts value to what you do and shows why interdepartmental relationships are so important,” Eva said. “This story is why we do what we do every day. If anyone deserves a celebration of life, it’s Carley.”