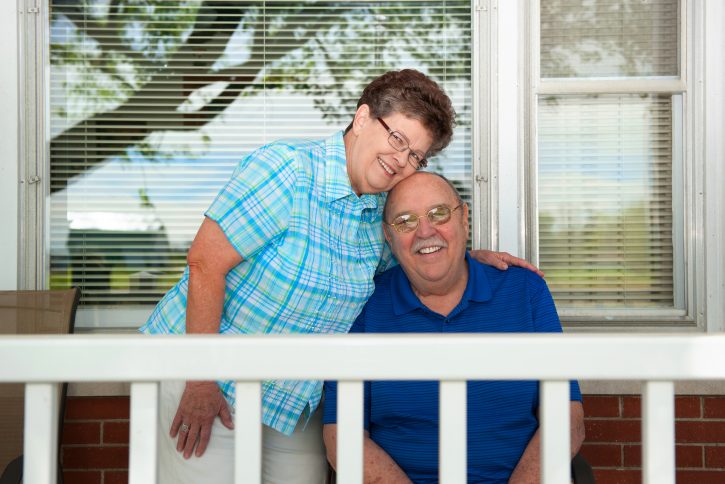 When Don Dupler first came face-to-face with vascular surgeon Krishna Mannava, M.D., he didn’t realize he was meeting the physician who would end up saving his life – twice.

It was 2012 and Don had just been admitted to FMC following a pancreatic attack. A CAT scan revealed that in addition to an inflamed pancreas, Don also had an abdominal aortic aneurysm – one of the largest doctors at FMC had ever seen.

“All of my organs were attached to the aneurysm, and because of its size and proximity to my kidneys, they had to do surgery,” said Don, a Lancaster resident. “What stands out most about that day is Dr. Mannava standing there and being so calm about the whole situation. He was in complete control, and that’s what got me through it.”

An abdominal aortic aneurysm (AAA) is a potentially life-threatening condition that is often discovered while a patient is being treated for something else. Small aneurysms need regular monitoring, but larger aneurysms, like the one in Don’s case, require surgery.

Following the surgery, Don resumed his normal activities, including volunteering at the front desks of both FMC and River View Surgery Center in Lancaster. It would be nearly five years before Don would come to FMC again as a patient – but this time, the situation was much more serious.

On the night of January 10, Don’s wife, Dee, called 9-1-1 when Don’s blood pressure plummeted. Don also had been experiencing severe back pain that day. When Don arrived at FMC, despite his rapidly deteriorating condition, he was able to make one request: he asked staff to call in the surgeon who had taken care of him back in 2012. Staff members agreed to Don’s request and alerted Dr. Mannava, even though the surgeon was not on call that night.

Don’s situation was grim. His AAA had ruptured due to a sudden tear between the metal and fabric of his previous graft and he was bleeding internally. Only about 1 in 5 people survive a ruptured abdominal aortic aneurysm, and Don’s body was quickly shutting down. He was immediately rushed into surgery, where Dr. Mannava repaired the AAA. Don’s recovery included 13 days in the ICU, and three days in PCU.

“Even though Don was awake and talking, there were signs that he was rapidly bleeding,” Dr. Mannava said. ”Don is like a family member and we were going to do anything in our power to take care of him. Together with efficient and simultaneous resuscitation by Dr. David Conley, we were able to quickly identify the problem related to his old graft and crafted a solution to repair it using a minimally invasive technique.”

Months after his health scare, Don has regained most of his strength and is back to volunteering at the hospital where his life was saved due to the quick action of his care team. When he sees the staff members who treated him back in January, he is reminded of Psalm 107:20, which reads: “He sent out his word and healed them; he rescued them from the grave.”