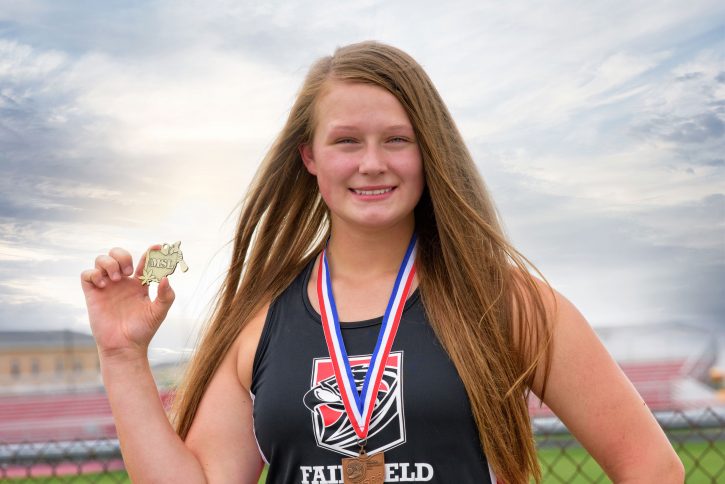 On the morning of May 8, the day Brittany Devall was set to compete in the Mid-State League Buckeye Division Track & Field Meet, the 16-year-old was feeling more nervous than usual. She was confident in her abilities, but also about to do something she had never done before – throw shot put just four months after undergoing surgery for a torn ACL.

“I lay awake in bed thinking, ‘should I take this risk? What if I fall’?” said Brittany, a junior at Fairfield Union High School. “I had been waiting and working for this moment for so long, and now it was here.”

For Brittany, a lot of hard work, pain and uncertainty had led up to this one important moment in her life. Almost immediately after learning that she had torn her ACL for the second time in two years, she had been focused on one goal – recovering in time to compete in the MSL. Luckily, she had a supportive team on her side – her therapists, her athletic trainer and her orthopedic surgeon, Kristyn Darmafall, M.D. of Fairfield Healthcare Professionals.

“I love track and, in my first year, I ended up winning the MSL Buckeye Division in shot put,” Brittany said. “Ever since then, it has been this dream of mine to compete in the MSL all four years of high school. It’s just something I want to say I did.”

Reinjuring herself was the last worry on Brittany’s mind as she and her teammates competed in a basketball game against Teays Valley in December 2017. It was the end of the game, the Falcons were winning, and Brittany was elated to be back on the court.

“I had a previous ACL injury when I was 14 and that game against Teays Valley was significant because it was the first game where I finally felt like I was getting back at it,” Brittany said.

Moments later, the game took a sudden turn for the worse.
“We were pressing the team and they threw the ball high, so I sprinted to get it,” Brittany said. “That’s when my knee caved in and I fell.”

Fairfield Union Athletic Trainer Alex Craine immediately rushed in to do an evaluation. He initially thought it might have been a bone bruising, as Brittany didn’t have the typical symptoms of a torn ACL, such as swelling and severe pain when she walked. He referred Brittany to Fairfield Healthcare Professionals Orthopedics to get an MRI of her knee.

A few days later, Brittany was on her way to basketball practice to watch her fellow teammates when her mother, Suzanna Devall, called her with the news.

“She told me Dr. Darmafall had read the MRI report and it was an ACL,” Brittany said. “I was so upset; I remember trying so hard not to cry. Anyone who has been through it knows that a torn ACL is a mentally tough injury – it’s not an injury where you are in a cast for a few weeks and then you’re fine. The recovery is a very long process.”

At Brittany’s first appointment with Dr. Darmafall, she broached the subject of whether she would be able to compete in track, which was just four months away. Dr. Darmafall was honest in her feedback, telling Brittany she didn’t think it was likely she would be ready. However, despite her doubts, she didn’t discourage Brittany from her goal.
“As a former college athlete myself, I know how difficult it can be recovering from an injury,” Dr. Darmafall said. “I try to encourage patients and remind them of their end goals, whatever those may be.”

Brittany and Suzanna said from the very beginning, they felt comfortable with Dr. Darmafall and confident that they were in the best hands.

“Dr. Darmafall was great, she was understanding, she was like a friend,” Brittany said. “It was obvious to me that she cared about my recovery.”

On Jan. 9, Brittany underwent ACL surgery. Two days later, she was able to put weight on her knee, a positive first step in the right direction. In the months to follow, as winter slowly melted into spring, Brittany worked harder than she’d ever worked before. The MSL meet was inching closer and closer, and Brittany wasn’t about to let this opportunity slip away without a fight.

“I knew if I didn’t work on it, it wasn’t going to get any better,” Brittany said. “I did all of my exercises and was making progress quickly. My range of motion was good and I was proud of that.”

Brittany said her therapists at Fairfield Medical Center’s Outpatient Therapy Services were, like Dr. Darmafall, supportive of her personal goal to make it to MSL.

“Every person at Fairfield Medical Center who worked with me was encouraging – they never acted like my dream was something I couldn’t achieve,” she said.

Dr. Darmafall said recovering from ACL reconstruction can take anywhere from 6-12 months before the patient recovers adequate strength, balance and agility to return to a level 1 sport, such as football, soccer, basketball, lacrosse and rugby. There is a range for when a patient is cleared to return to a sport based on functional testing performance, which evaluates limb symmetry between the surgical knee leg and the uninjured leg.

She said when she saw Brittany in clinic a few weeks later, she was pleasantly surprised with her progress.

“I was impressed with where her strength and balance were at this point in a normal recovery, especially considering the full year it took her to recover her strength after her first ACL surgery,” Dr. Darmfall said.
During that appointment, Brittany nervously raised the question she had asked several months prior – did Dr. Darmafall think she would be able to compete in the MSL that May?

Dr. Darmafall said she was still reluctant, as she was envisioning Brittany using a high-level rotation pivoting maneuver to throw, which would have put a lot of strain across the ACL graft. When Brittany explained that she planned to do a gliding type of throw, the mood in the room suddenly changed.

“She demonstrated the power throws she was hoping to do,” Dr. Darmafall said. “Based on how well she had committed to her rehab and training, I felt comfortable enough to consider allowing her to safely work toward being able to perform those two power throws potentially by the end of the season.”

Brittany was thrilled – but there were still a few hurdles she would have to scale. She would need to wear a special ACL functional brace due to her early return and if it rained on the day of the meet, she was out of luck. She also would need to get cleared by the therapy team and Alex Craine. With just weeks to go, Brittany worked hard to get all of the approvals she needed to compete.

“While I did set high standards for this early return to competition, Brittany was dedicated and passed every test Alex and I threw at her,” Dr. Darmafall said. “I was proud of how hard Brittany worked at meeting her goal of throwing at MSL, especially given the rocky course she had with her first ACL injury recovery.”

On the day of the MSL, Brittany learned that a very special fan would be watching her from the stands – the physician who had been with her every step of the way, Dr. Darmafall. Dr. Darmafall said she was both nervous and excited to watch Brittany finally compete.

“Brittany worked so hard on her recovery after the second ACL surgery, despite having had a difficult prior experience, that she truly earned this opportunity to throw shot put,” Dr. Darmafall said.

The hard work ended u 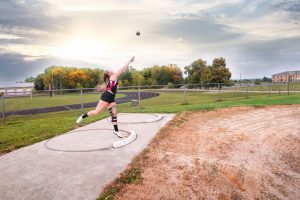 p being worth it. Brittany competed flawlessly and left the meet with a first-place medal.

“She truly worked harder than almost any athlete I have seen and I wanted her to be happy with her performance whether she finished first or last,” Dr. Darmafall said. “Being present when she took first place was an added reward!”

Brittany said she is thankful to Dr. Darmfall, Alex and the Outpatient Therapy staff at FMC for supporting her goal and helping her reach it. She said she hopes her story inspires other athletes who are in her situation.

“I want other female athletes, especially those with ACL injuries, to know that if they work hard, they can meet their goals,” she said. 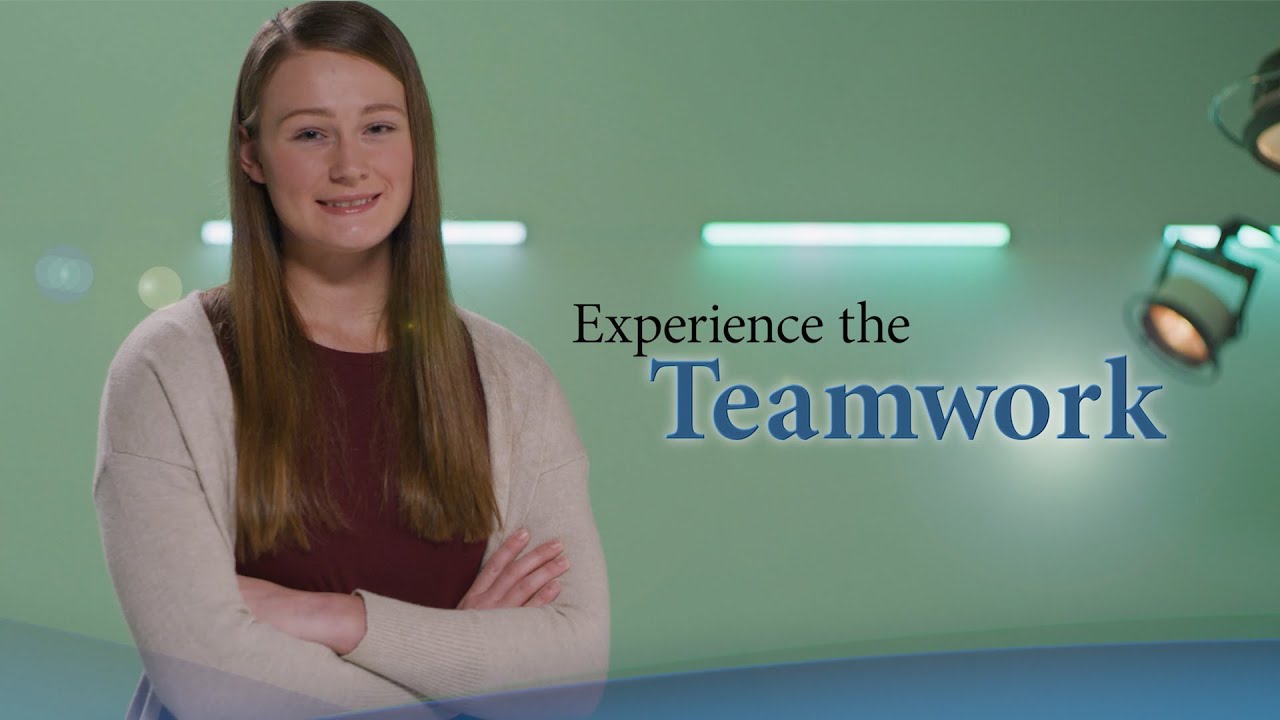