Chuck Snider, a long-time resident of the greater Toledo area, is no stranger to the Lancaster community. “I grew up here, and I graduated from Berne Union High School,” he shared. “To come back and see Fairfield Medical Center after all this time has been incredible; it’s an excellent hospital.”

On April 1, Chuck quickly recognized his dizziness, nausea and fatigue as red-flag symptoms. “I’ve had two heart attacks previously, and a total of six cardiac stents,” he explained. Shortly after arriving at Fairfield Medical Center with his partner, Jeanie, their suspicions were confirmed: Chuck had suffered his third cardiac event.

Cardiologist Michael Reinig, D.O., of Fairfield Healthcare Professionals Cardiology, was the first physician of many to care for Chuck during his stay, and it was at his recommendation that Chuck agreed to undergo a heart catheterization in order to evaluate his existing stents. By then, Chuck’s daughter, Cindy Millikan, an operating room nurse, had arrived at FMC to be by her father’s side. She instantly observed a strong connection between Chuck and his caregivers.

“There was no denying how comfortable he was with his providers,” she said.

The following day, FHP Cardiologist Jeremy Buckley, M.D., performed Chuck’s cardiac catheterization. Unfortunately, the outcome wasn’t what they had hoped for: Dr. Buckley revealed that Chuck would need to undergo a
triple – and maybe even a quadruple – bypass surgery.

As the discussion turned to open-heart surgery, Chuck expressed his confidence in FMC’s clinical staff. “I knew the best care I could have ever gotten was right here,” he shared.

Originally, the team planned to perform Chuck’s open-heart surgery by the end of the week, but due to the condition of his heart and concerns about his blood pressure following his vascular surgery, Dr. Reinig recommended giving Chuck some time to rest.

He would spend the weekend in the ICU and head to surgery with FHP Cardiothoracic Surgeon P. Aryeh Cohen, M.D., on Monday morning.

“In hindsight, I think that decision probably helped save his life,” Cindy shared.

During his stay, Chuck had the opportunity to meet with patients who had undergone similar heart surgeries only days prior and were already progressing well. “He was fully prepared to be one of those people come Monday,” Cindy said. But when the day arrived, Chuck and his loved ones found themselves in a very different situation.

A TURN OF EVENTS 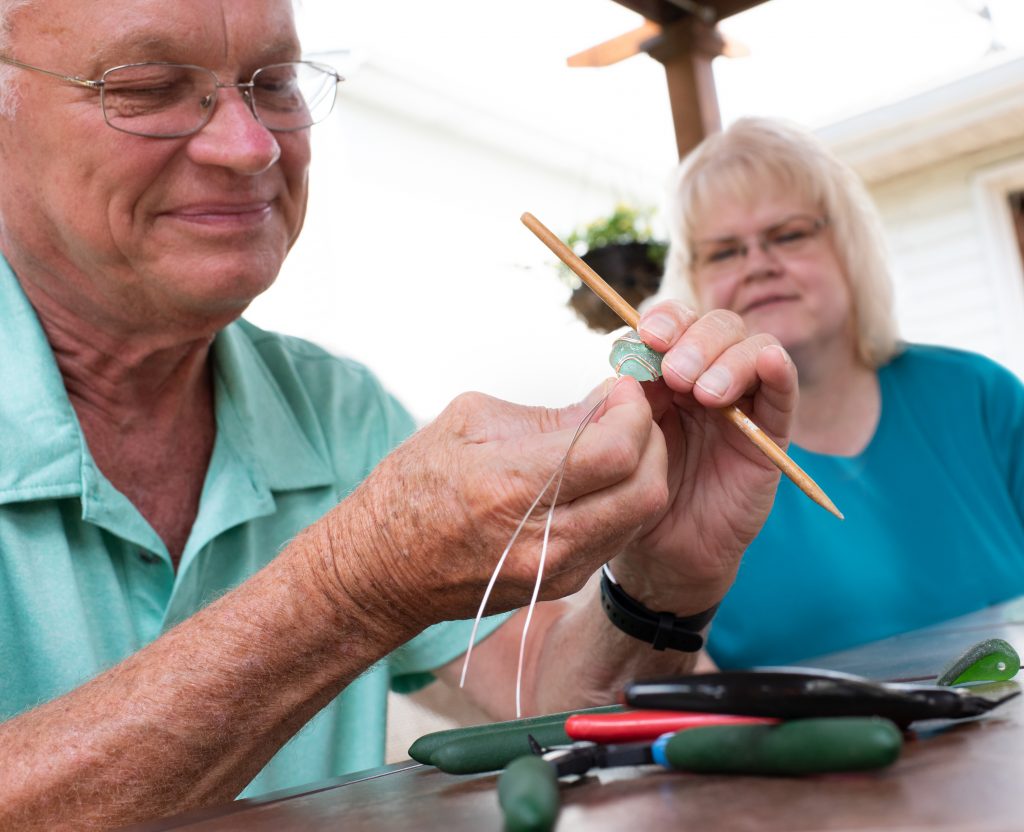 On the morning of April 8, while his biggest supporters gathered in the surgery waiting area, Dr. Cohen successfully completed Chuck’s quadruple bypass without complication. With Chuck stable and resting comfortably in recovery, the family took a much-needed break before visiting hours began.

When they returned, however, Chuck’s circumstances had changed.

Chuck’s blood pressure had grown unstable, and his electrocardiogram (EKG) readings were abnormal, indicating that he was not getting enough blood flow – or oxygen – to his heart. Concerned that one of his existing stents may have closed during surgery, the staff immediately alerted the family and arranged for Chuck to return to the Cath Lab in order to investigate more closely. After a brief visit, Cindy, Jeanie and the rest of the family headed back to the waiting area to continue supporting Chuck – and each other.

In the Cath Lab, Chuck’s health was deteriorating quickly. He was placed on a device to assist his failing heart while the team worked to identify the problem. The catheterization soon revealed that Chuck’s newly created bypasses were open and functioning well, but there was undoubtedly a problem with one of his older stents that would require immediate attention. With Chuck’s chances of survival dwindling, Dr. Cohen formulated a plan.

“At that point, they told us they were able to get him on the ECMO machine,” Cindy recalled. ECMO (extracorporeal membrane oxygenation) is a life-saving technology that artificially replaces the natural heart and lungs. This form of short-term life support allows the body to rest and recover in extremely critical situations.

“ECMO is similar to the heart-lung machine that we place when we do open-heart surgery, ” Dr. Cohen explained. “It allows us the time we need to help save our patients.”

With the ECMO device in place and the time nearing 8 p.m., the team prepared to care for Chuck through the night. Cindy and her family, exhausted and emotional, returned to the ICU waiting area.

Chuck’s condition was touch-and-go through the late night hours, his life hanging delicately in the balance.

“There were nurses everywhere,” Cindy recalled. “And they were all there to watch over him.” Even so, the situation was fragile, prompting Cindy to discuss her father’s end-of-life wishes. “The staff was wonderful. They were supportive and as helpful as they could be,” Cindy shared. “It was nice to know that they were thinking of us. They even eased our burden by bringing us food and drinks. I know that seems small, but things were changing so quickly that no one wanted to leave, and because of the staff, no one had to.”

As dawn approached, Dr. Cohen appeared in the waiting room. “He looked like he had been up all night,” Cindy remembered, “but he came out, and he told us that my dad was alive. It was a surreal moment – you’re trying to get a little shut-eye because you haven’t slept, you’re praying to God and you’re planning a funeral all at once. And to hear that he was alive? It was just an incredible moment.”

Cindy later learned that Dr. Cohen was indeed up all night, performing surgery with her father four additional times to manage his condition. “To get that level of personal care from an attending physician is unheard of,” she admitted. “You don’t get that from other hospitals.”

“Dr. Cohen is an amazing man,” Chuck agreed. “I’m quite happy with the way he handled things.”

Once Chuck’s condition was stable enough for transport, his journey to The Ohio State University Wexner Medical Center – FMC’s partner in ECMO patient care – was set to begin. The intricate process spanned several hours and required both a specially trained team and a mobile critical care unit. “Seeing them place him in the mobile ICU was another one of those surreal moments,” Cindy remembered. “There was no telling what might happen on that trip.”

Upon his arrival at Ohio State University, Chuck was placed in the cardiac ICU. He was expected to remain on the ECMO device for 3-5 days, and would be taken to surgery every 48 hours to care for his incision and ward off infection. But much to the family’s surprise, when Chuck was taken to surgery on April 10, he was also removed from the ECMO device – a mere two days after its placement. “The surgeon said his heart looked really healthy,” Cindy said. “And from that point on, my dad did extremely well. He made stride after stride in his recovery.”

As Chuck continued to improve, Cindy stayed in touch with Fairfield Medical Center. “I called twice to express how grateful we were for all the good care he received,” she shared.

“I can’t thank Dr. Cohen and his team enough for everything they did for me,” Chuck added. “There was absolutely nothing that could have prevented what happened, and it was amazing that they kept me alive – it’s just unbelievable.”

Later, when Chuck returned to FMC for his post-operative recheck, it was a special reunion. “Everyone was there – Dr. Reinig, Dr. Buckley, Dr. Mannava and, of course, Dr. Cohen – and they were all coming in and hugging me,” Chuck laughed. “I think they were a little surprised to see me alive and well.”

“It was amazing; he looked so good that I didn’t even recognize him,” Dr. Cohen admitted. “It’s moments like that – when everything ends well – that makes everything we do worth it.”

Even as he’s on the up-and-up, Chuck is still under the watchful eye of his loved ones. “Cindy has been keeping pretty close tabs on me,” he confessed. “And I don’t think I would be here without Jeanie,” he added gratefully.

Chuck is now participating in cardiac rehabilitation at FMC – although he admittedly took some time off for a well-deserved vacation to the shores of Lake Erie, a place he holds near and dear to his heart. “I make beach glass jewelry,” Chuck beamed, “and my daughter and I have a little business we run together. We all went up to a festival to sell our wares.”

“Aside from beach glass jewelry, I draw, I paint – I love art. I like projects and I’m looking forward to doing more of them,” Chuck said with the conviction of a man who is simply glad to be alive.