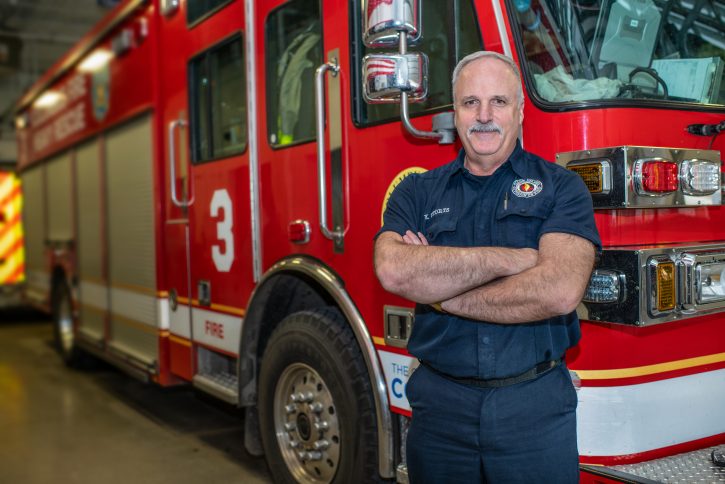 After being diagnosed with gastroesophageal reflux disease, or (GERD) – a digestive disorder that can cause heartburn, a sore throat, difficulty swallowing or even chest pain – and suffering from the related symptoms for nearly 30 years, Kelly decided it was time to find a lasting solution.

Kelly had been taking medication for almost 20 years to help control his symptoms, but the drugs eventually stopped working. At that point, his heartburn was affecting not only his digestion, but also his sleep. “As a firefighter, I have to get my sleep when I can,” Kelly said, “and if it’s interrupted by my stomach, that’s just not going to fly.”

In addition to suffering from regurgitation, reflux and heartburn, Kelly had also developed Barrett’s esophagus, a condition characterized by changes in the esophageal lining caused by chronic acid reflux. Those with Barrett’s esophagus have an increased risk of developing esophageal cancer. And according to Kelly, he was willing to do what he needed to do to reduce his risk. “I wanted to take esophageal cancer off the table. Any chance of cancer is more than I want,” Kelly confirmed.

After Kelly voiced his frustration with his medication no longer working, his primary care provider, Troy Hampton, D.O., of Fairfield Community Health Center, recommended that he visit FMC’s Heartburn Center for a consultation.

As one of the leading heartburn centers in Ohio, the Fairfield Medical Heartburn Center provides state-of-the-art diagnostics and comprehensive treatment to patients like Kelly who are suffering from GERD symptoms. The dedicated nurse coordinator and team of multidisciplinary providers use a collaborative approach to educate patients and provide both non-surgical treatment options, such as medication or lifestyle changes, and surgical options, like the Nissen fundoplication or the LINX® procedure.

During his initial consultation in March 2019, Kelly heard from Tonya Mundy, Heartburn Center nurse coordinator, about how her own GERD had been successfully treated with a surgery. “I share my story with patients because it reassures them that someone knows and understands exactly what they are going through,” Tonya said.

Next, providers from the Heartburn Center ran a series of tests to learn more about Kelly’s GERD and develop his treatment plan. When presented with the options for treatment, Kelly decided to move forward with the LINX® procedure, during which a surgeon places a flexible magnetic ring around the esophagus to prevent reflux. “I liked the fact that it’s reversible and can be taken back out if I have an issue with it,” Kelly explained. “That was probably the biggest selling point for me.”

Kelly’s surgery was completed in late August 2019 by Jeffrey Yenchar, M.D., general surgeon and Heartburn Center Medical Director. Immediately following surgery, Kelly was able to stop taking his heartburn medication completely. And soon after, Kelly was back at work with no restrictions. He says he couldn’t be happier with the results of his procedure. “I’ve been able to eat whatever I want, whenever I want. No heartburn, no reflux,” Kelly shared.

One of the most impactful benefits of Kelly’s surgery has been the improvement in his sleep. As an emergency responder, getting restful sleep is vital for his job, which often has him up in the middle of the night for calls. “Getting better sleep, not having the fogginess – it’s been a gamechanger,” Kelly admitted.

Kelly says he wishes he would have known sooner about the alternatives to medication for treating GERD symptoms, and he hopes that sharing his story will help encourage others to consider

pursuing the surgical route. “There are options out there. I’m a paramedic, and I had no idea,” he admitted. “Now that I don’t have to make plans for what I eat, when I eat, how I sleep, when I sleep – I just keep wondering why I didn’t do this earlier. It would have saved me a lot of restless nights.”

In fact, Kelly feels that his overall quality of life has improved since seeking surgical treatment for GERD. “I didn’t realize how bad of shape I was in before the surgery. I just knew I had reflux,” Kelly shared. “I feel completely different now. I told Dr. Yenchar, ‘I know people tell you this a lot, but you really saved my life here. You made a big difference.’ ”

If you believe you have GERD, call the Fairfield Medical Heartburn Center to schedule a free consultation – 740-689-6486.