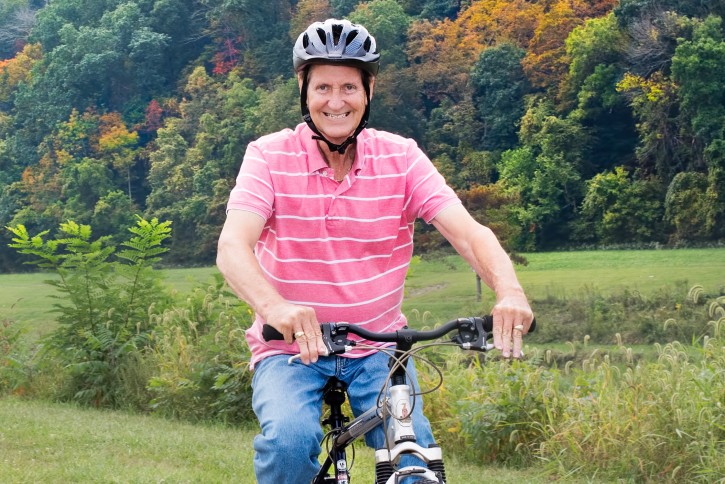 It’s a crisp, late summer day and Delbert Buck is in his element as he pedals along the bike path near his home in Athens. Just a few months ago, a simple bicycle ride would have been a difficult feat for the 69-year-old heart attack survivor. Now, it’s just another example of how far Delbert has come in his recovery.

“I’m not 100 percent and I still have a long road ahead of me, but I’m alive, and that’s the important thing,” he said.

It was April 8 when Delbert suffered a sudden heart attack while at his home. He initially went to the Emergency Department at O’Bleness Hospital in Athens, but wasn’t there long. When doctors realized the severity of his condition, they told him he needed to be transported to a hospital with more advanced cardiac care.

“The doctors asked me where I wanted to go, and all of the hospitals on their list were in Columbus except for Fairfield Medical Center,” Delbert said. “I said, ‘I’ll take that one’.”

Delbert had never been to Fairfield Medical Center, but he liked the idea of not having to travel to Columbus for his care. The decision ended up being the right one for him. Within hours, he was in the capable hands of cardiologist Jeremy Buckley, M.D., who performed a cardiac catheterization on Delbert to open up an artery that was completely blocked. Due to the poor condition that Delbert was in upon arriving at FMC, Dr. Buckley utilized a heart pump called the Impella® Percutaneous left ventricular assist device to keep Delbert alive so he could complete the life-saving procedure.

“Delbert was having a massive heart attack and was in shock on arrival to Fairfield Medical Center,” Dr. Buckley said. “Quickly restoring blood flow to the injured heart was of utmost importance. However, with shock, we needed additional support from the heart pump to restore blood flow with coronary stents. The pump is great, as it can be placed very quickly to help support his heart. ”

The Impella heart pump is the smallest heart pump in the world, measuring the width of a pencil. It can be inserted during a catheterization through the femoral artery, a large artery in the thigh, and then threaded up into the left ventricle of the heart. Without the Impella and the quick action of Delbert’s care team at FMC, Delbert may not have survived his heart attack.

“The moment I arrived at FMC, they took me right into the Cath Lab and that heart pump kept me alive,” Delbert said. “The entire process went very smoothly considering the condition I was in.”

Delbert, a retired postal worker, never suspected a heart attack when he first began experiencing pain in the left side of his chest and in his arm just above his elbow. He took a few aspirin the first time it happened, which alleviated the pain, and then resumed his normal activities. But when the pain came back a few days later, he decided to drive himself to O’Bleness to get checked out. In hindsight, he said he should have called an ambulance.

“Aside from the chest pain, I felt fine, so I didn’t think it was going to be anything too serious,” Delbert said.

Delbert said from beginning to end, his stay at FMC could not have gone better. He said the staff in the Cath Lab and the ICU was extremely friendly and attentive. He also appreciated the personalized attention he received from Dr. Buckley, who would stop by Delbert’s room 2-3 times a day to check on him and answer questions.

“I liked that Dr. Buckley also had an office in Logan, so that when it was time for my follow-up appointment, I didn’t have to drive all the way to Lancaster to see him,” Delbert said. Doctors determined that Delbert’s heart attack was most likley caused by a blood clot, and not an unhealthy lifestyle.

“Not all patients will have the typical risk factors for heart attacks such as diabetes or high blood pressure,” Dr. Buckley said. “Delbert was a healthy person prior to his heart attack with really no risk factors. He recognized something was wrong and sought care. Time is of the essence in cases like his and transferring the patient to the nearest facility capable of fixing the heart attack saves lives. He is a great example of coordinated transfer and quick response for a heart attack patient.”