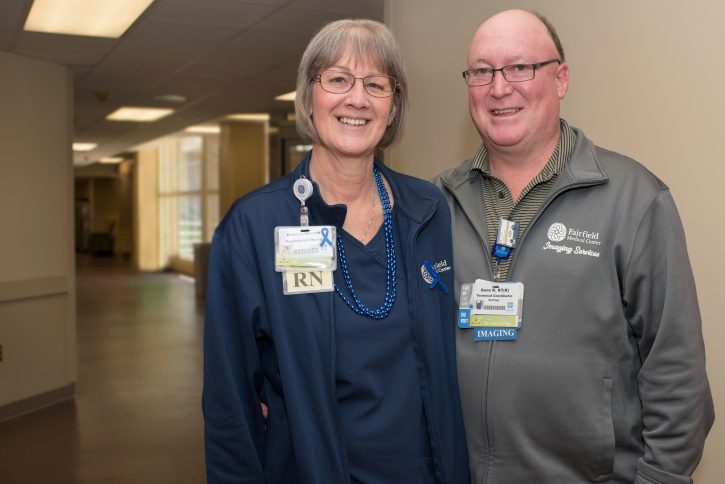 When FMC nurse Deb Klinger made an appointment for her first colonoscopy in November 2017, she was a few years overdue, but not too concerned. With no risk factors or family history of colorectal cancer, she was confident her results would come back fine. What she wasn’t prepared for was the life-changing news that would came just days later.

“They told me I had stage 3 colon cancer,” said Deb, who works in FMC’s CV/Stress Lab. “I was completely taken aback; I had no risk factors, no symptoms – it was silent.”

Colorectal cancer is the development of cancer from the colon or rectum. It is the third most common cancer in the U.S. A colonoscopy, which is recommended for most men and women beginning at the age of 45, is considered the gold standard for detecting colon polyps early, before the cancer grows.

Just days after Deb received her diagnosis, she underwent a colectomy, in which a portion of the colon is removed. She then opted to undergo six months of preventative chemotherapy at FMC, which she started on Dec. 13, 2017. During those six months, she battled nausea and fatigue but continued to work with the hope that staying busy would keep her mind off the battle she was fighting.

“I was new to the cardiovascular department, and they were extremely supportive,” she said. “My cancer care team also was wonderful – Dr. Robertson, Dr. Yenchar, Dr. Singh, Dr. Kolli, Shelly Romine and chemotherapy and infusion became like family. That was why I chose to stay here at FMC for my treatment – I had no reason to go anywhere else.”

Deb said her biggest regret was that she put off her colonoscopy until she was 54 – at the time, the recommended age was 50. She encourages others to not make that same mistake.

“My husband hadn’t had his on time, and the first thing I told him was, ‘you need to have it done,’ and he did,” she said. “I put mine off for four years because I was busy and it wasn’t good timing, but in hindsight, I realize that the timing is always good. Had I put it off a few more years, it may have been too late for me to do anything.”

Colon cancer is treatable and beatable when caught early. If you are age 45, it’s time to schedule your colonoscopy. You may need to get screened before age 45 if:

Early detection saves lives. If you are age 45 or older, or have a family history of cancer, speak to your healthcare provider or call 740-687-8863. For more information about colorectal cancer, click here.