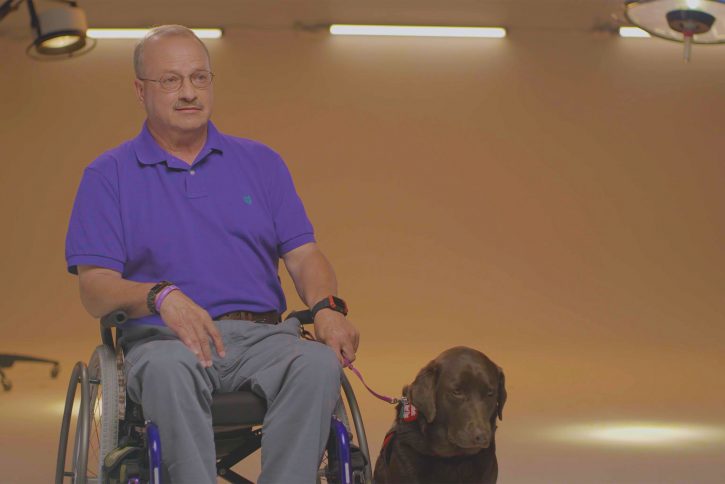 By 7 a.m., the Glouster resident was in the gym warming up for his 90-minute session. Two hours later, when most people are just getting their day started, he was in his car and on his way home.

When it comes to his heart, Ken is willing to do whatever it takes to be healthy. That plan has included making the lengthy drive to FMC three days a week for his cardiac rehab, which ended in October. FMC offers a cardiac rehab program that is specially-designed for patients like Ken who use a wheelchair – but that’s not the only reason Ken was willing to make the long commute.

“I could have done my rehab in Athens, but I feel comfortable at Fairfield Medical Center,” said Ken, a Rushville native who started cardiac rehab in July following pacemaker surgery. “I don’t mind driving far to get the best care.”

Noelle Pierce, supervisor of FMC’s Cardiopulmonary Rehab, said that in her 15 years at FMC, Ken has one of the longest commutes of any patient.

“It’s beyond unusual for a patient to drive over an hour to come here for rehab,” she said. “I think that alone speaks volumes for how much Ken loves this hospital.”

Ken’s relationship with FMC is one built upon trust and gratitude. Twice, doctors at FMC have treated him in what were serious, life-threatening situations. The first time was in 1982, when Ken came through FMC’s Emergency Department with his back broken in four places.

“I was in a dune buggy accident where I rolled one hundred yards, end over end,” Ken recalled. “I had no idea if I was going to make it out of the hospital alive. The doctors ended up taking bone out of my hips and grafting it into my back.”

More than 30 years later, Ken was back at FMC for a standard cardiac stent procedure when his heart suddenly stopped beating.

“I was lying on the table and talking to Dr. [Alaeddin] Ayyad, the physician doing the procedure’,” Ken recalled. “I looked over at the heart monitor and I actually saw myself flatline.”

The last thing Ken remembers was the sound of a Code Blue being called overhead and the sight of Dr. Ayyad performing chest compressions on him.

“They were all right there for me,” Ken said. “If they wouldn’t have been on their A-game, I’d be dead.”

In all, Ken has had nine stent procedures at FMC, as well as surgeries to repair his sternum and place a pacemaker. He’s formed close friendships with many of the staff members and sees them as part of his family.

Recently he decided to give back to FMC by becoming a Patient Pal volunteer with his dog, Bella. As a Patient Pal, Ken visits with patients to ensure they are having the best experience possible.

He said some people are surprised when he tells them about all of the ways FMC has cared for him over the years. “They say, ‘you’ve had all that done at that little hospital?” Ken said. “And I say, ‘have you seen that little hospital lately? It’s not so little anymore’.”