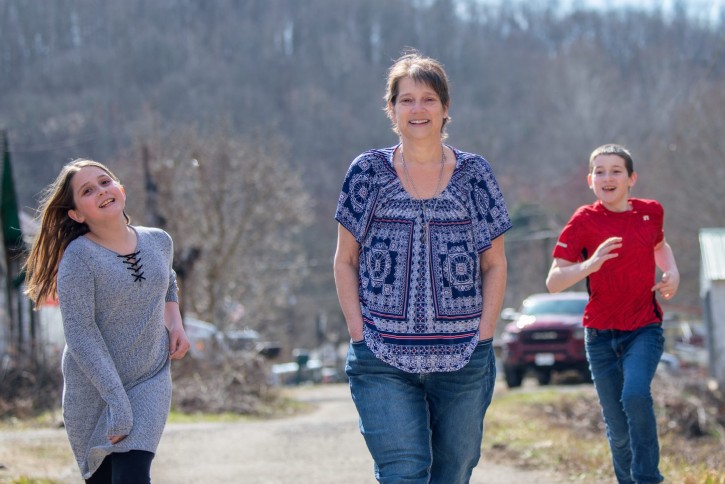 On a typical Saturday afternoon, you won’t find Lisa Fierce, 50, of Glouster, sitting at home. Instead, she prefers to spend her free time playing with her new grandchild, traveling with her family, enjoying the outdoors and staying active.

It’s a lifestyle that was once nothing more than a dream for the loving mother of three, who used to weigh more than 350 pounds. Her decision to undergo weight loss surgery, and ultimately change her life, has since made those dreams a reality in the span of just one year.

“Because of my weight loss surgery, the life I’m living now is the best I’ve ever lived,” Lisa said. “I can do things now with my family – my children, grandchildren, husband, parents – that I’ve never been able to do before.”

THE START OF IT ALL

Lisa’s road to bariatric surgery was filled with twists and turns. She initially considered taking the step nearly a decade ago, but the timing wasn’t quite right. “I had two young children, I had just started back to work, and I wasn’t sure the type of procedure that I was considering at the time was right for me,” Lisa recalled.

As her children grew older, life grew busier, and Lisa’s personal plans were put on hold: a sentiment many mothers know all too well. When the idea of weight loss surgery was eventually reintroduced, it came about somewhat unexpectedly. For several years, Lisa had been dealing with bothersome urinary issues, including urinary retention, feelings of urgency and straining.

“I would feel like I just drank 10 gallons of water, but I would only be able to urinate a tablespoon,” Lisa shared. “It was really frustrating.”

In search of answers, Lisa paid a visit to her primary care provider who, at the time, suspected the issues may be obesity-related and referred Lisa on to Fairfield Medical Center bariatric surgeon Timothy Custer, M.D., FACS. At the time of referral, Lisa weighed 364 lbs. and was also diabetic.

“I am thankful for that referral,” Lisa shared. “I was miserable, and I knew that – for my health and if I wanted to be around for my children and grandchildren – I really needed to do something.”

ON THE ROAD TO SUCCESS

Her initial consult with Dr. Custer and the rest of the bariatric team at FMC was what Lisa could only describe as “eye-opening.”

“It can be hard to have an honest conversation about weight,” Dr. Custer explained. “I try to approach every conversation in a very straightforward manner: I don’t shy away from the consequences that can be associated with obesity, and I try to explain the science behind the disease while figuring out each patient’s goals for the future and how we can best accomplish those together.”

For Lisa, this no-nonsense approach confirmed what she had known all along: that she was making the right decision for her health and her family.

“Dr. Custer discussed the risks of continuing on at my weight, and he really struck a nerve that day,” Lisa said of her initial consultation. “He didn’t mince words. He didn’t sugarcoat it. He told me exactly what I needed to hear, and I’m grateful for that.”

Shortly after her first appointment, Lisa buckled down and got to work. She faithfully attended the required bariatric education classes, where she learned about the lifestyle and nutrition changes she would need to make in order to be successful. “I don’t think I could have done any of this without the bariatric team,” she said. “They encouraged me a lot, they were patient and kind, and by the end of my classes, I thought to myself, ‘I’m ready. Let’s do this thing.’ ”

After months of preparation, education and anticipation, the day finally arrived: on Sept. 25, 2018, Dr. Custer performed Lisa’s Roux-en-Y gastric bypass procedure, marking the start of her new life – and the beginning of a journey Lisa never expected to face.

On that September day, Lisa’s weight loss surgery was nothing short of a shining success. In the midst of her procedure, however, Dr. Custer and his team made a startling discovery: there was blood in Lisa’s routinely placed urinary catheter.

A CT scan soon confirmed that Lisa wasn’t in any immediate danger, but it was determined that she would need to schedule an appointment with Derrick L. Reedus, Sr., M.D., of Fairfield Healthcare Professionals Urology following her recovery to learn more about the causes of her urinary issues.

GETTING BACK ON TRACK

Wonderful blessings arrived in the months that followed. By December, Lisa had already lost 50 lbs., landed a new job alongside a group of supportive and caring people, and – most notably – welcomed her beautiful granddaughter, Sophia Grace, into the world.

Even so, her urinary issues persisted.

“I had cancelled and rescheduled my appointment with Dr. Reedus a couple of times,” Lisa admitted. “There was always something that came up, or something else that needed done, and I just kept putting it off.”

After receiving some tough love from a coworker, Lisa finally obliged – she would attend her appointment with FHP Urology. No exceptions. No excuses.

“They scheduled a scope of my bladder and ureters,” Lisa recalled. “When I woke up in recovery, my mom was there waiting. She told me they found something in my bladder.”

During a procedure known as a transurethral resection, Dr. Reedus removed a 13-centimeter mass from Lisa’s urinary tract – a tumor that had grown large enough to partially block her urethra. A sample of the tissue soon confirmed that bladder cancer was to blame for Lisa’s ongoing struggles. Fortunately, the cancer had not spread into the muscle wall of Lisa’s bladder, and Dr. Reedus was able to remove all of the cancerous cells during surgery.

“Had it not been for my primary care provider referring me to Dr. Custer, and had it not been for my gastric bypass surgery and the red flags they found during my procedure, I have no idea how long it would have taken me to find out I had cancer. Bariatric surgery saved my life in more ways than one.”

Despite the detours, Lisa has finally reached the goal she worked so hard to achieve: a life full of health and happiness. Since her cancer diagnosis, scopes of Lisa’s bladder have continued to come back clear. As for her weight, she’s lost a total of 185 lbs.

“It’s absolutely amazing how much can change in a year,” she marveled. “Because of my weight loss, I no longer have diabetes, I no longer have acid reflux, my knees and feet don’t hurt anymore, my back doesn’t ache like it used to, my fibromyalgia doesn’t flare up like it did before – and I’m doing things that I never dreamed of.” 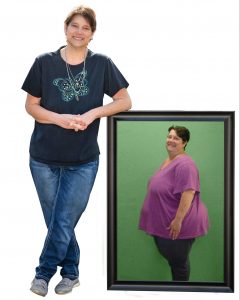 Dr. Custer said, for him and his team, watching patients like Lisa find success is the most rewarding part of the experience. “We get the privilege of sharing in the joy of lives changed and dreams coming true. We get to witness people completely transform themselves and share in the exhilaration of folks reaching goals they once felt were unattainable.”

With the burden of her weight in the rearview mirror, Lisa has been making up for lost time. Her summer was filled with days of play and family trips (including a long-awaited vacation to the beach), and her fall a blur of pumpkin patches, corn mazes and sweet memories. Instead of finding herself winded and uncomfortable, Lisa is now leading the pack.

“I couldn’t walk long distances before. I was always falling behind or taking a break,” Lisa explained. “These days, my husband is the one asking me to slow down.”

But perhaps the most profound change of all can be found in the quietest of moments.

“I can hold my family so much closer now,” Lisa smiled. “I finally have a lap that the kids can sit on, and when the baby lays her head on me and falls asleep, it’s just an incredible feeling. My biggest regret – my only regret – is not having this surgery sooner.”