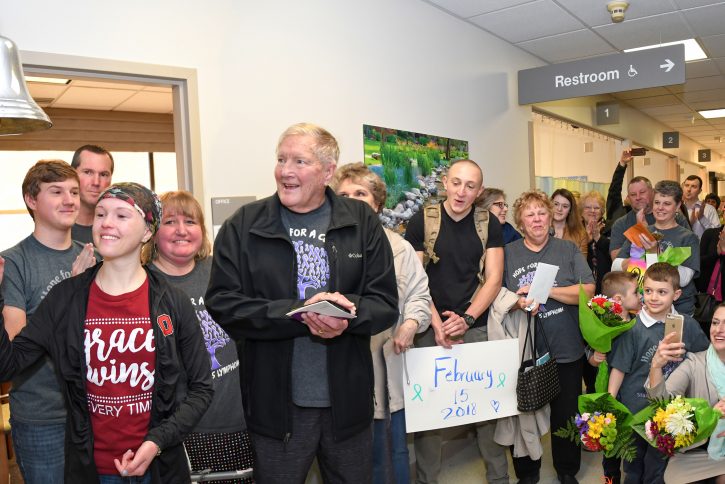 The day that Mary Grace Gundelfinger rang the bell to symbolically end her cancer treatments, she was joined by a lot of people who – like her – had been anxiously waiting for this moment.

With smiles on their faces and cell phone cameras in tow, the crowd squeezed into the hallway of Fairfield Medical Center’s Cancer Resource Center, many of them waving signs and wearing T-shirts with the 20-year-old cancer survivor’s name across the front. When Grace reached up to ring the bell, the crowd’s jubilant cheers and applause echoed throughout the entire building.

“It was so sweet,” Grace said of the bell-ringing, which took place seven months after she was diagnosed with Hodgkin’s lymphoma. “To have everyone there supporting me was truly amazing. I felt overwhelmed with gratitude.”

Much of that gratitude, said Grace, goes to the clinicians at Fairfield Medical Center who were by her side with each step of her unexpected cancer journey. As a nursing student, Grace said her cancer care team exemplified what it means to be a dedicated caregiver.

“I want to be like those nurses at the Cancer Care & Infusion Center,” said Grace, who attends the Mt. Carmel School of Nursing program at FMC. “Everyone who cared for me, they have become like my family.”

Grace said her cancer was discovered just days after her annual physical with her primary care physician, Jennifer Gibson, M.D.

“A few days before my appointment, I was working out and pulled something that was causing me to have pain in my neck – I wasn’t going to mention it at the appointment, but then I changed my mind,” Grace said.

“Dr. Gibson started feeling my neck in the area where I had pain and that’s when she felt the lump,” Grace said. “I was asymptomatic, so that was truly the hand of God right there.”

Grace’s X-rays and CT scans both came back unclear, so she was referred to FMC surgeon Dr. Jeffrey Yenchar to have the lump surgically removed. The day after the surgery, Grace’s worst fears were confirmed – she was told she had Hodgkin’s Lymphoma, a cancer that affects the lymphatic system, which is part of the body’s immune system.

Grace said the day after she received her diagnosis, Dr. Gibson followed up with her by phone to offer reassurance.

“She told me that this type of cancer is very curable,” Grace said. “I thought it was nice that she took the time to do that.”

Grace said the decision to keep her cancer care local was simple, especially since she had just transferred to Lancaster from Columbus for nursing school. By getting her treatments at FMC, she could continue to go to school on the hospital’s campus and wouldn’t have to make the long drive into Columbus every other week.

“Fairfield Medical Center was awesome,” Grace said. “There was such a family atmosphere; I would walk through the hospital and the doctors would greet me by name. My caregivers took the time to get to know both me and my family.”

In 2016, FMC opened its Cancer Care & Infusion Center on the main campus to help cancer patients like Grace keep their care local and convenient. The center houses chemotherapy, infusion services, the offices of oncologists Roopa Saha, M.D., and Kanwaljit Singh, M.D., a pharmacy, the Cancer Resource Center and more.

At the beginning of her treatments, Grace was put in contact with FMC oncology nurse navigator Holly Griffith. As an oncology nurse navigator, Holly has oncology-specific clinical knowledge and offers individualized assistance to patients, families, and caregivers to help them better understand and cope with their cancer journey.

Holly said she was impressed at how Grace dealt with her cancer and continued to attend classes while receiving treatment. In the six months that Grace was treated for cancer at FMC, she only missed one class.

“The first time I met Grace, I knew it was going to be a pleasure to care for her, as well as her family,” Holly said. “Grace makes you want to strive to be a better person in your day-to-day life. She not only went through cancer treatment, but continued with nursing school. During that time, I did not hear her complain once.”

Grace said her strong Catholic faith and love of nursing school helped keep her focused on the future – not on the cancer. 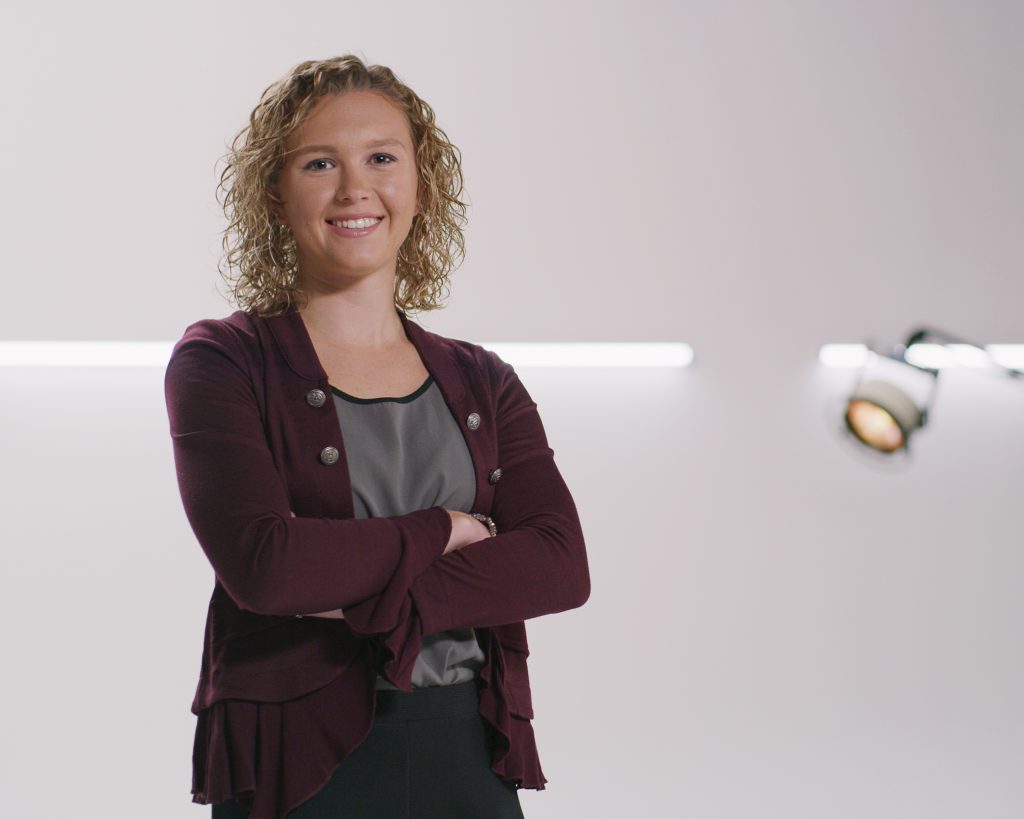 “Going to daily mass is what got me out of bed every day, and it helped to be able to go to school and be social and spend time with my classmates,” Grace said. “I could not have done this journey without the love and support of my family and friends.”
She said her caregivers at FMC also played a huge role in helping her get through the most difficult year of her life. Now in remission, Grace said her experience has given her a better understanding of what it means to truly care for a patient.

“It has made me more sympathetic and understanding of what patients are going through,” she said. “I’ve learned that sometimes the best thing to do is to say nothing at all and just be there for the person. The nurses at Fairfield Medical Center, they understood that. Sometimes during my treatments, they were just there, even if we weren’t talking.”

Her advice for cancer patients? Let your journey “shape you, not shake you.”

“Stay positive. Find the bright side because there is one,” Grace said. “Know that this too shall pass.”