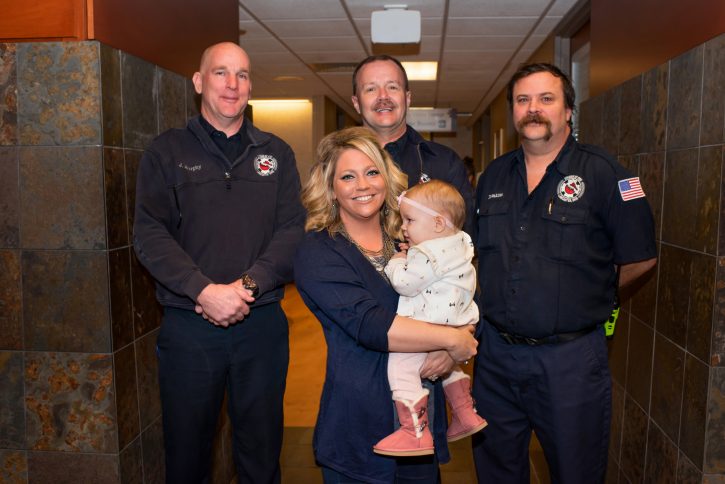 As a busy mom of three, Nikki Griffin doesn’t always have the opportunity or time to put herself first. So when she booked an appointment at her local hair salon shortly after the birth of her third child, she was excited to indulge in a few hours of much-needed pampering. 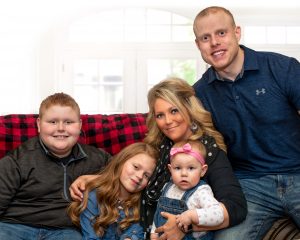 But as she prepared to leave the house with her newborn daughter, Kail, for her appointment on the morning of March 2, 2018, Nikki started to feel extremely nervous, as though she was having an anxiety attack. She also had back pain and the unusual feeling that her wrists were hurting.

Chalking the anxiety up to post-partum nerves, Nikki brushed off the strange feeling as she headed out the door. The anxiety went away, only to return about an hour later as the stylist was placing foils in her hair.

“The feeling of anxiety was becoming more intense and I had a tightness in my chest, as well as pain between my shoulder blades,” Nikki recalled. “I began to break out into cold sweats.”

Nikki excused herself, splashing some cold water on her face in an attempt to calm down. Concerned, her stylist called an ambulance. When the crew from Lancaster Engine 2 arrived – firefighter paramedic Dave Hammond, Dave Jenkins and Jerry Murphy – Nikki’s symptoms had subsided and her blood pressure and EKG were both normal.

Feeling better, Nikki told the crew she didn’t need to go to the hospital – but they were less convinced.

“We have been around long enough to know when something just is not right,” Hammond said. “Despite Nikki’s hesitation to go with us, we decided it would be best to hang around just a few extra minutes. Women, especially moms, tend to brush off symptoms.”

Hammond’s instincts proved to be correct. A few minutes later, Nikki became nauseous and began to dry heave. She agreed to go to the Fairfield Medical Center’s Emergency Department to get checked out. As her stylist quickly removed the foils and rinsed the color from her hair, Murphy held and soothed Baby Kail, who was now beginning to fuss. As soon as they could go, the crew and baby headed to the ED. 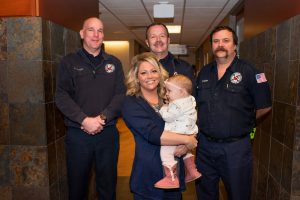 By the time Nikki arrived in the Emergency Department, her symptoms had resumed. She was immediately surrounded by doctors and nurses who confirmed her worst fears – she was experiencing a heart attack caused by spontaneous coronary artery dissection, a rare and potentially deadly condition.

“Spontaneous coronary artery dissection (SCAD) is a very rare complication that can be caused by extreme high blood pressure and accounts for 24-35 percent of heart attacks in women less than 50,” Dr. Cohen said. “It’s the most common cause of pregnancy-associated heart attack.”

Unbeknowst to Nikki, she had experienced symptoms that something was wrong prior to her hospitalization on March 2. An MRI and CAT scan came back fine, but the headaches continued.

“If I had not gone to get my hair done, I would have stayed home and tried to sleep and who knows what would have happened,” Nikki said.

As Nikki was being prepped for surgery, her husband John Griffin, 33, of Lancaster, was doing his best to process what was going on while caring for their newborn baby. Understanding the distress the whole family was under, Nikki’s care team at FMC went above and beyond to care for not only Nikki, but her entire family.

“The whole hospital really rallied around our family to help make an extremely difficult experience as manageable as possible,” Nikki said. “If it wouldn’t have been for Fairfield Medical Center, I don’t know how we would have made it through.”

Nikki particularly acknowledged the staff members and volunteers who stepped in to take care of Kail so that Nikki could get the treatment she needed and John could focus on his wife. An FMC volunteer watched Kail while former FMC Chaplain Jonathan Hanks sat down with John to provide support and comfort during the tense hours leading up to and during Nikki’s surgery.

OUT OF SURGERY AND ON WITH LIFE 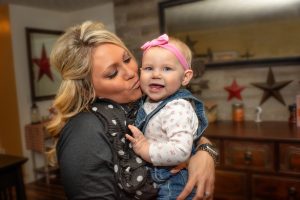 Throughout the entire experience, Nikki kept thinking about Baby Kail, who was being cared for in the nursery at FMC. Nikki told her caregivers several times that she was currently nursing her child and didn’t want to be away from her for long. The staff listened and did what they could to accomodate Nikki’s request. Shortly after Nikki was transferred to recovery, she was reunited with Kail. Knowing how important it was for Nikki to be able to breastfeed her child even while recovering from surgery, the maternity staff made sure Nikki had the support she needed to continue to nurse.

In addition, Nikki’s nurse, Tiffany Dicken, tried to keep Nikki comfortable by coming in on her day off to blow dry and style her hair.

“I had my hair and make-up done every day to try to convince my doctors that I was well enough to leave,” said Nikki, who was having trouble being away from her other two children, son Noah, 12 and daughter Aniston, 7. “Tiffany would do my hair because she knew it was important to me.”

Now one year post-surgery, Nikki said she and her family are doing well. Within weeks, Nikki was back to work at the job she loves – serving as the marketing coordinator for Reflections Retirement Community in Lancaster. She said the residents were among her biggest supporters during her recovery.

“I truly love my job and the people I get to see every day,” she said.

Nikki knows had it not been for the patient and knowledgeable EMS team and the care and expertise of the staff at FMC, her story could have had a much different ending.

“I am just so grateful to everyone who was involved in my care,” Nikki said.