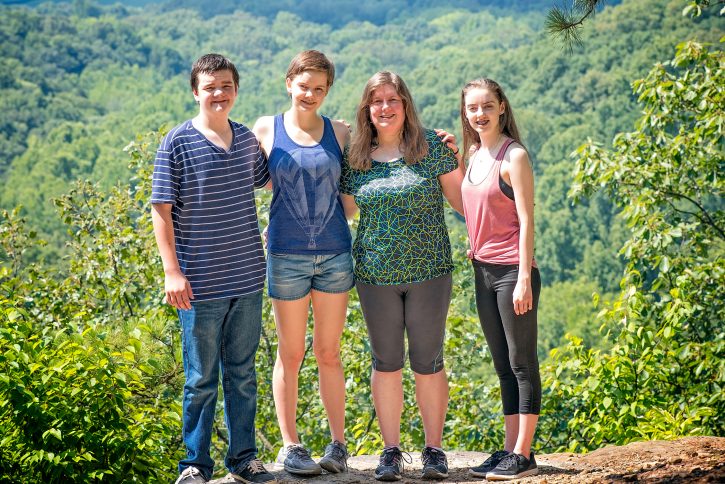 For what may have been years, Lisa Lipka was living her life unaware of the fact that a cyst was slowly growing right next to her heart.

Aside from occasionally feeling winded and short of breath, Lisa said she didn’t have any noticeable symptoms that would have led her to believe that something serious was brewing on the inside. She was still able to keep up with her nine children, all of whom are homeschooled, while still making time for outdoor activities like hiking and gardening.

It wasn’t until the cyst had grown to nearly the size of a grapefruit that it started to make its presence known.

“I remember the symptoms started on a Friday afternoon with a headache,” Lisa recalled. “I took my blood pressure and it was elevated, which is odd because it’s typically very low.”

After a fitful night’s sleep, Lisa’s headache worsened. Her blood pressure was still elevated, so she decided to go to Fairfield Medical Center’s Emergency Department.

“They ran several tests, which included an X-ray, a CT scan and an ultrasound of the heart,” Lisa said. “There were several providers all working together to try to figure out what was wrong with me.”

Lisa’s test results revealed a pericardial cyst. The pericardium is a membrane, or bag-like structure, that surrounds the heart and a pericardial cyst is a small, fluid-filled mass. It typically does not cause symptoms until it grows to the point where it is pressing on the heart or the large blood vessels leading to or from the heart, obstructing blood flow.

“They had no idea how long the cyst had been growing, but the doctors told me I shouldn’t have been able to take more than three steps without becoming out of breath,” Lisa said. “They were pretty amazed at how well I had been functioning.”

“We can find these cysts when they are small, but we are more concerned when they cause symptoms,” Dr. Cohen said. “They can become infected, or bleed. They cause chest pain by putting direct pressure on the heart. They also can cause shortness of breath by putting pressure on the lung. Generally, if these cysts are causing symptoms, it is beneficial for the patient to have them removed.”

Lisa immediately underwent video-assisted thoracoscopic surgery (VATS) in order for Dr. Cohen to remove the cyst. During the procedure, Dr. Cohen noticed that one of Lisa’s lungs was very dark and black. The following day, pulmonologist Dr. Andrew Twehues removed a one centimeter section from Lisa’s lung so it could be tested for cancer. Thankfully, the results revealed no cancer.

Lisa said the idea of both procedures concerned her because she wasn’t sure how she would handle her recovery, as she is allergic to pain medication.

“My care team really worked with me to control my pain through a combination of Tylenol and Toradal, which is typically given for migraines,” Lisa said. “Incredibly, it worked. I know it sounds strange, but I didn’t have any pain after surgery.”

Lisa said she was very impressed with the care she received during her time at Fairfield Medical Center. From the collaboration of the doctors to the compassion she experienced from a nurse who held her hand during a particularly uncomfortable test, she felt unafraid and confident the entire time that she was in the best of hands.

“All in all, my recovery was only two days, when it probably should have been about a week,” Lisa said.

It wasn’t long before Lisa was back to her normal, busy routine of home schooling, gardening and, most recently, hiking through one of her favorite scenic spots, Christmas Rock in Lancaster.

“I had a lot of faith in both God and my care team and they helped me through it,” she said.