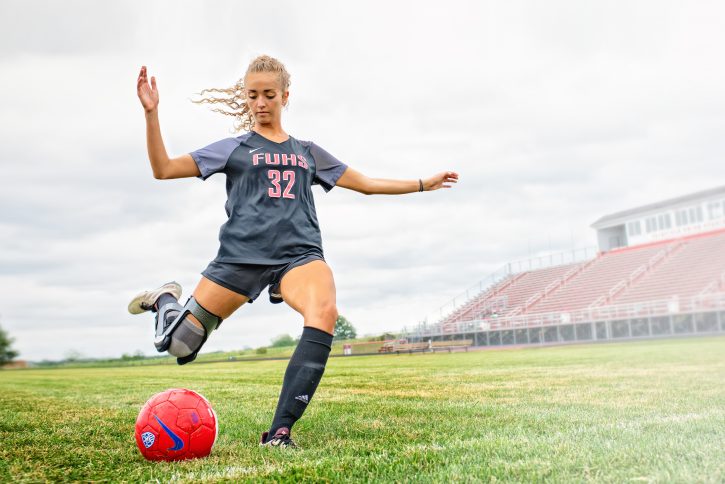 If you were to ask Fairfield Union soccer player Brianna “Bri” West what one of her goals in life is, she would say to play soccer in college. But after two knee injuries sidelined her from the sport she loves, the therapy team at Fairfield Medical Center inspired her to reach a new goal.

Ever since Bri West, 17, of Lancaster was a little girl, she had her heart set on playing soccer in college. Her whole life revolved around the sport, along with her plans for the future. In March 2018, she was practicing with her club soccer team when she shifted her weight in the wrong direction and felt a pop in her knee. Determined to not sit on the sidelines, she continued to play with her team that day.

“I am not the type of person to step out of a game, and I probably injured myself even further by continuing to play,” Bri stated about her injury. “I couldn’t walk up the steps when I got home, and that’s when I knew I needed to have my knee looked at.”

After a week of continuous knee pain, Bri and her parents decided to reach out to the orthopedic team at Fairfield Medical Center. Fairfield Healthcare Professionals Orthopedics delivered the news that Bri had a complex lateral meniscus tear in her left leg and would need surgery. The meniscus is cartilage in the knee that acts as a shock absorber to cushion the area between the thighbone and the shinbone, while providing stability to the kneecap.

Not surprised by the news and wanting to get back on the field, Bri underwent outpatient surgery at River View Surgery Center. After a successful surgery, she completed her therapy with a local outpatient physical therapy company. When she was cleared from physical therapy months later, she hit the grass running and was thrilled to be playing soccer again. A college soccer recruiter from Marietta College even watched Bri play and discussed the possibility of her continuing the sport in college. Despite her knee injury, Bri was feeling hopeful that her childhood dream was still a reality.

In November 2018, Bri was once again on the practice field with her club soccer team when she took a shot on goal that would change everything.

“When I kicked the ball, my opponent’s knee hit my right leg,” Bri stated. “I was in the air, and I could feel that same unforgettable pain in my knee – the same pain I felt the first time I injured myself. When I landed, I just laid on the ground and knew that this process was going to happen all over again.”

Not even a year after her first knee surgery, Bri once again found herself in the Fairfield Healthcare Professionals Orthopedic clinic, where she was told that she had bone bruising, a subcortical fracture and an ACL tear in her right leg. “I was devasted and confused, but I was just going to take it day-by-day,” Bri stated. “I knew I had to get better, but I didn’t know what would come of it this time around.” 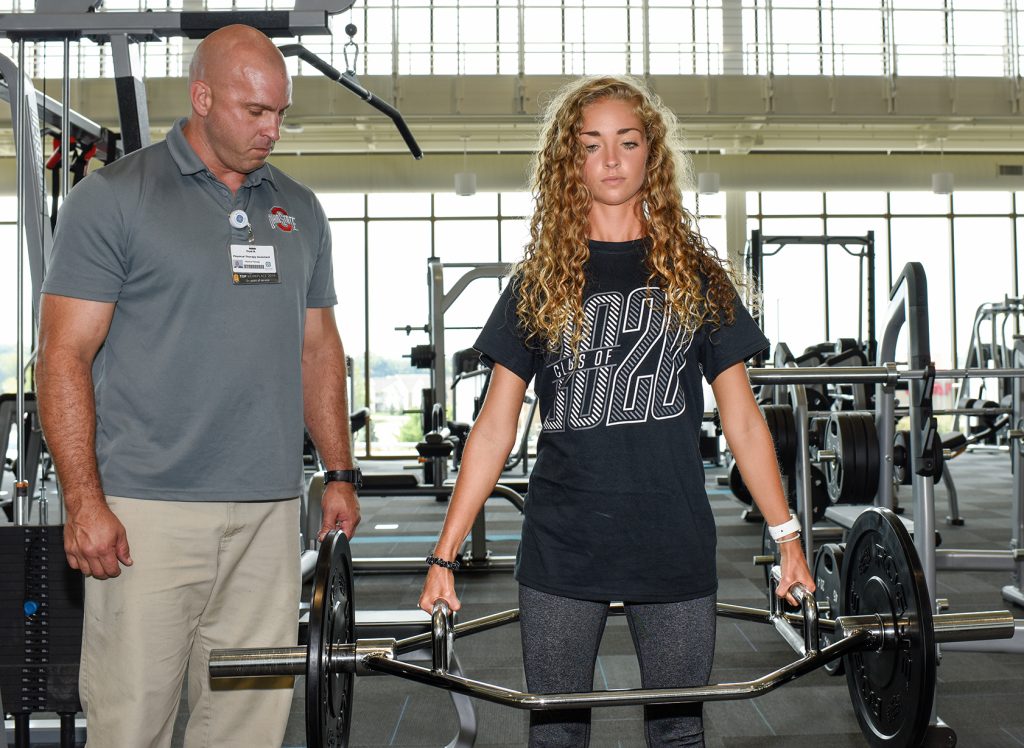 Bri began her outpatient physical therapy and the long journey to recovery with Physical Therapist Assistant (PTA) Thad Bowersock. “Bri is one of the most passionate and determined people I have ever met,” Thad said. “I saw how motivated Bri was, and any new challenge I threw at her, she continued to push herself. She is more than just a patient; I see her as a friend that I can help get better and meet her goals.”

During her therapy sessions, Thad motivated Bri to always push herself and not give up on her soccer dream. “Thad gave me a lot of hope,” Bri said. “Every time we stepped up to a new obstacle or machine during PT, he would amplify it by one more exercise. If I could do one or two more workouts, I could keep going, and that motivated me.”

Bri has been doing one more workout and pushing herself every day because of Thad’s encouragement. “I feel stronger mentally than I did before,” Bri stated. She runs 2-3 miles every day and, when she has the time, she practices by kicking 32 goals – her jersey number.

A NEW GOAL IN MIND

Even with soccer still on her mind, the team at FMC inspired Bri to expand her ambitions to include another goal. “These two surgeries happened for a reason,” Bri stated. “My dream has always been to play college soccer, but I know now that I want to help others reach their goals. Thad helped me become stronger and more positive, and I want to carry that on to others. Working with Thad and the experience I had with the rest of the physical therapy team made me want to become a physical therapist or pursue sports medicine.”

With that new goal in mind, Bri became a volunteer at Fairfield Medical Center, so she can give back and learn as much as she can about the medical field. She has been volunteering at the new River Valley Campus to learn more about sports medicine and physical therapy. 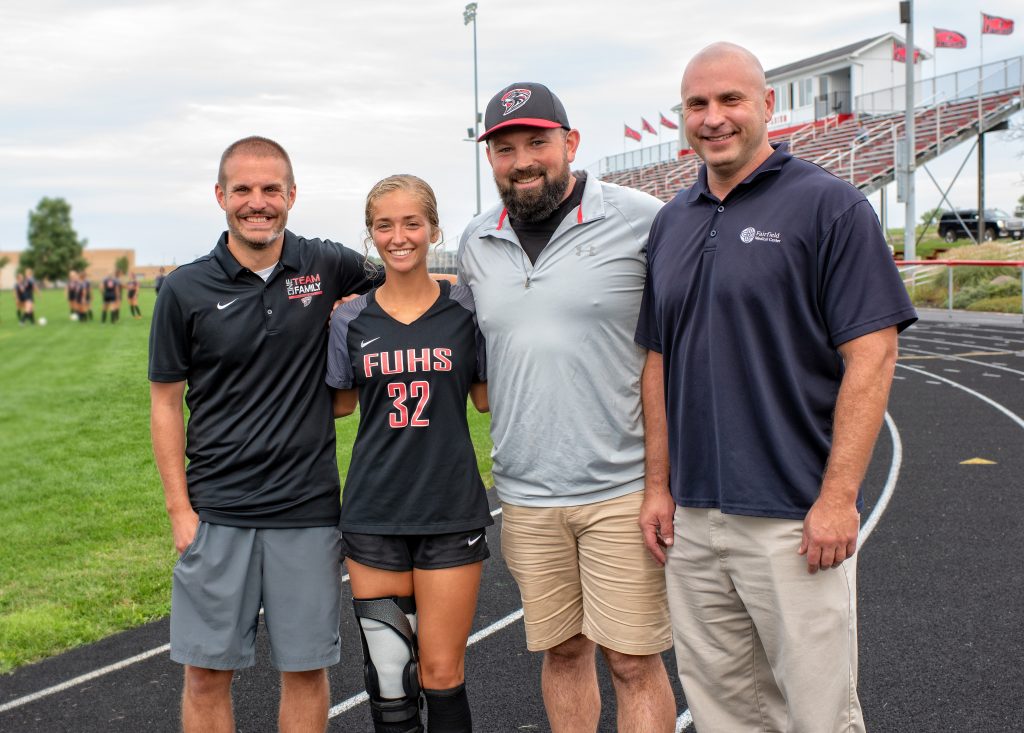 As for soccer, Bri transitioned out of physical therapy and is working with Fairfield Union Athletic Trainer David Craine, ATC, to begin functional return-to-play protocols, such as rehabilitation and strength and conditioning training. “The thing about Bri that I admire most is her will to get better and not allow her injuries to define her,” David Craine, said. “We continue to work to get her stronger, more agile, faster, and just all-around better than before her injury. She is like the Energizer Bunny, no matter what I throw at her, she always wants more.”

After a long journey to play again, Bri passed her functional testing in August, and the team at FHP Orthopedics cleared her to play her senior year of soccer at Fairfield Union. “I am so excited to play and ease back into it,” Bri stated. “It has been a long process, but I can’t wait to be 100% again.”

Bri is back to playing the game she loves and is very hopeful for what her future holds. She is looking at schools such as Marietta College to play soccer and, because of her therapy experience, she is excited to pursue a degree in sports medicine or physical therapy to help others achieve their goals.