When you play a sport, every person on the team has one thing in common – love for the game. That’s exactly what connected Fisher Catholic volleyball players Abby Kenney, 17, and Kate Gavin, 18, when they found themselves on the same team in 2021. During the season, the two athletes shared moments of celebration following hard-fought wins and were there for each other through tough losses, but nothing bonded them more than when they experienced similar injuries on the court within months of each other. With the help of friendship, determination and a dedicated team of therapists at Fairfield Medical Center, Kate and Abby’s focus never wavered as they struggled through their long and difficult recoveries and motivated each other to get back into the game.

Kate first injured her knee during a basketball game her junior year in January 2021. “I jumped to get a rebound and when I landed, my knee buckled backwards,” Kate said. “And then I fell to the ground, and I felt the pop. That’s when I knew something was wrong.”

It was confirmed that Kate had completely torn her ACL and partially torn her meniscus. She went on to have surgery to repair her ACL, during which her surgeon used a piece of her hamstring as a graft to reconstruct the ligament. They also cleared the damaged tissue from her meniscus to allow the injury to better heal naturally.

Three days after her surgery, Kate started therapy with physical therapist Steve Lutz at Fairfield Medical Center Outpatient Therapy Services. “Many of our patients who are young athletes are eager to get back to the sport they love,” Steve said. “Kate was really motivated, and we took it slow, focusing on practicing good techniques for developing her muscle groups evenly.”

Despite her progress, Kate was unable to participate in track during her junior year. Fortunately, she was back on the volleyball court for her senior year, where she joined her teammates – including her friend, Abby – on the floor.

“After the first surgery, I wasn’t really nervous at all to return to sports,” Kate said. But during a scrimmage in the beginning of the season, Kate watched as her teammate Abby jumped in the air to hit the volleyball. When she landed awkwardly, Kate knew Abby was experiencing the same pain she had felt a season before.

“I jumped up to hit the ball, and when I came down I felt my knee pop out to the side,” Abby remembered. “I did a double- hop because it hurt so badly, and then I just fell to the ground. Everything in my body went crazy.”

Abby ended up in the Emergency Department at Fairfield Medical Center and went home on crutches with her knee in a brace. An orthopedic surgeon in the region determined that Abby had torn her ACL and would need surgical repair. A week later, she was on an operating table. Similar to Kate’s reconstruction, the surgeon used tissue from Abby’s hamstring to repair the injury. With her knee surgery complete, Abby and her family were hopeful that she would make a quick recovery.

Like Kate, Abby chose to receive her therapy at Fairfield Medical Center. Her team included Kate’s physical therapists Steve Lutz, and Thad Bowersock. Both Steve and Thad agreed that Abby was one of the most consistent and hardest working patients they have ever rehabilitated.

“Thad and Steve are really great,” Abby said with mutual appreciation for her therapists. “They know how to make PT fun, and they know how to push and encourage me.”

Although Abby was working hard on regaining her health, she was not hitting the benchmarks of a standard recovery. After three weeks, her knee remained swollen, the incisions were not closing and she had limited movement in the joint. On Sept. 10, she was admitted to Fairfield Medical Center for a closer look at what was going on.

“The doctor aspirated fluid from my knee, and a sample was sent to the lab for testing,” Abby said. It was quickly found that she had the rare infection Serratia marcescens gram negative infection.

“I was on the operating table the very next morning, and my surgeon cleaned out my knee and placed a drain tube,” Abby said. After surgery, a port was placed in Abby’s right arm to allow for a 30-day course of daily IV antibiotic treatments. Her wound also required extensive care, including daily bandage changes.

But as Abby approached the tail-end of her daily antibiotic treatments, her incision still wasn’t closing. With a relentless infection and her recovery full of complications, Abby was frustrated by the lack of progress.

“It was October by that point and none of my pain was going away,” she said. “I was just ready to put it all behind me.”

Working with her care team, a referral was sent to Nationwide Children’s Hospital to address Abby’s continued pain and lack of healing. Abby’s situation had become very serious, and the primary goal was to prevent an overwhelming infection and possible amputation of her leg. Abby and her family decided to have her newly reconstructed ACL removed to eliminate the infection and the source of her pain.

“I no longer have an ACL now,” said Abby. “The infection found a home, and it just made sense to get rid of it completely.”

After her third surgery and months of caring for her knee through the countless setbacks, Abby remained motivated. She was ready to get back to the court, back to her teammates and back to volleyball. However, she knew she had a lot of work yet to do. She once again turned to Fairfield Medical Center’s Outpatient Therapy Services for help, and found motivation and support from Thad and Steve.

“I was nervous to return to therapy and do any type of movement with my knee without an ACL,” Abby said. “Thad and Steve were very careful and helped comfort me.”

Reflecting on the journey, Steve is humbled by the trust the Kenneys placed in Fairfield Medical Center following Abby’s difficult recovery. “As Abby world through the hard PT sessions, I think her trust in us only strengthened,” he added.

While Abby was continuing her rehabilitation, Kate was back on the court and prepared to make the remainder of the season – and her senior year – a good one. Unfortunately, her time on the volleyball court was short-lived. During a practice in September, she heard the familiar “pop” of her knee as she was jumping up to set the ball. While her ACL remained intact, she had completely torn her meniscus. Kate had no choice but to start the process of rehabilitating her knee all over again. She had another knee surgery to repair her meniscus and began working with Thad and Steve at the same time that Abby was completing her therapy.

“Once Kate’s volleyball season ended with another injury, I could see her sails deflate,” Thad said. “She worked so hard to get back to volleyball, and it felt as if she didn’t have much more to give.”

“It was hard for me when my second injury happened knowing that I couldn’t play my favorite sport my senior year,” Kate added.

By winter of 2021, Kate and Abby were both regularly attending physical therapy. Recognizing the importance of collective support for rehabilitation success, the therapy team encouraged the pair to attend appointments together.

“As they both progressed to higher-level rehab, we started incorporating exercises and drills that they could do together,” Steve said. “Individually they worked hard, but together they pushed each other to go beyond what they thought they were capable of.”

Three times a week, Abby and Kate would meet and motivate one another at their sessions. Abby recognized the importance of staying motivated and trusting the key players in her recovery, and Kate embraced the support of the “little family” they had formed with their care team.

“Sports are just such a big part of our lives, and we both wanted to get back to it so badly,” Kate said. “When we were all working together, it felt like we formed a special bond that only we understood.”

Kate successfully completed therapy and was cleared to compete during her senior track season, where her team won the Mid-State League Cardinal Division. Thad and Steve attended a track meet to cheer her on. She is now a freshman at West Virginia University, where – because of her own injuries and therapy experience at Fairfield Medical Center – she is pursuing physical therapy as her career path to help others meet their sports medicine goals. 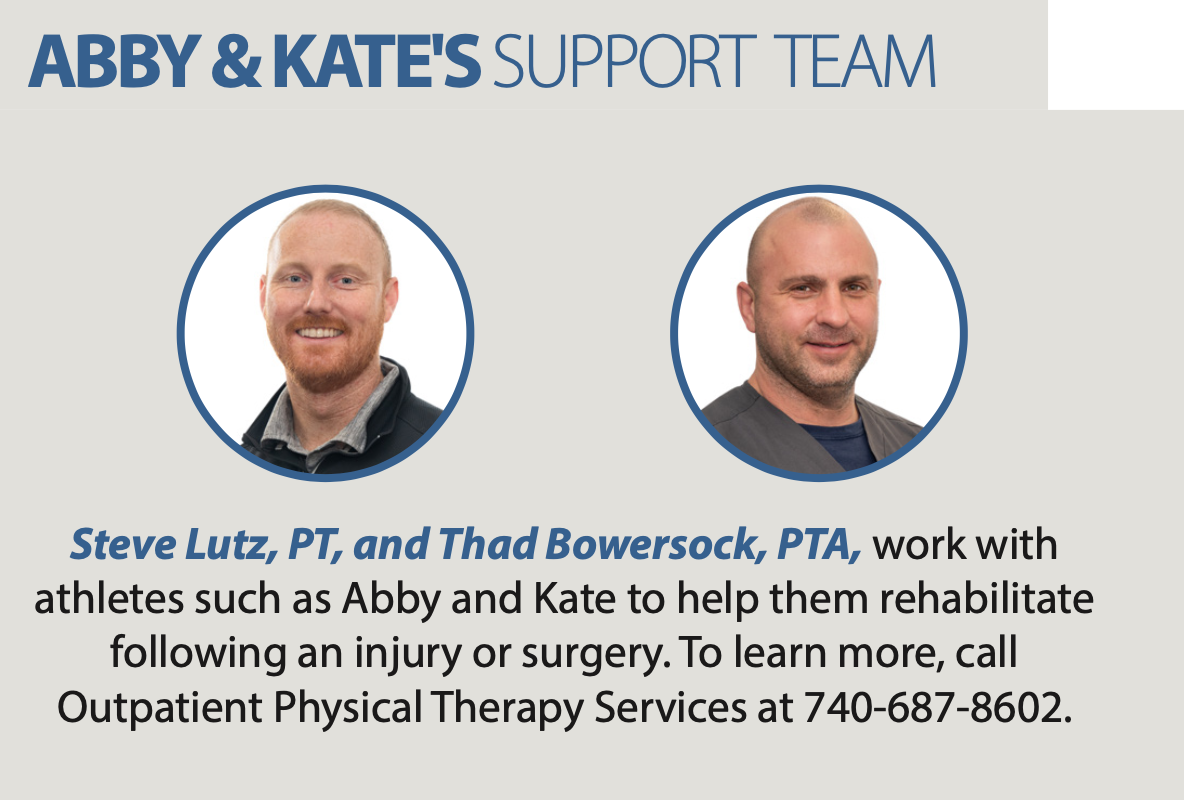 “Thad and Steve were very encouraging and make physical therapy fun for whomever they are helping,” Kate said. “Because of them, I felt like I could accomplish any goal I set.”

Abby was given the option to pursue another ACL repair, but her healthcare providers informed her that she was at risk for acquiring another infection. With this in mind, she and her parents made the decision to move forward in rehabilitating her knee without an ACL.

Three months after the failed graft was removed and the infection resolved, Abby was able to run, jump and squat more than her own body weight. Since she no longer has an ACL, Abby wears a brace that helps accomodate for her lack of innate knee stability. Now a senior in high school, she has returned to the volleyball court and even celebrated her 100th physical therapy appointment at Fairfield Medical Center over the summer. She still has some knee pain and hesitancy when playing, but she continues to lean on Kate and her therapy team when she needs some added motivation.

Kate and Abby credit one another for their individual success in therapy. Having a team approach to their treatment plan, both with each other and their therapists, gave them the chance to return to the sports they love and form a bond that is stronger than their struggles.

Use these links to learn more about Fairfield Medical Center’s orthopedic care and physical therapy services.