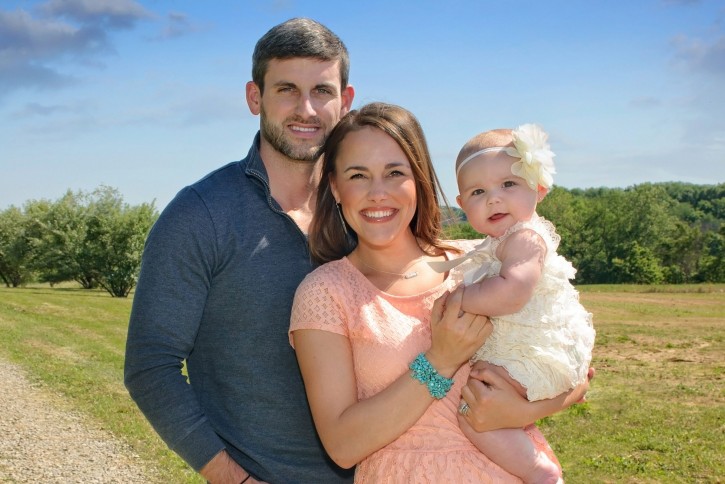 What was supposed to be the happiest moment of Rachael Hall’s life ended up being one of the scariest when the new mom was diagnosed with a rare and serious condition just days after the birth of her first child.

As a labor and delivery nurse at Fairfield Medical Center, Rachael Hall has cared for many mothers who were diagnosed with preeclampsia during their pregnancies. This common condition, which usually begins around a mother’s 20th week of pregnancy, is characterized by high blood pressure and typically resolves itself immediately after the baby’s birth.

But for Rachael, her own personal experience with preeclampsia occurred, not during her pregnancy, but after her daughter, Hadley, was born.

“We were getting newborn pictures taken and the photographer made a comment that my feet were swollen,” Rachael said. “I also had a very bad headache that day – the worst headache of my life. But when I checked my blood pressure, it was normal at 128/81.”

The next morning, Rachael’s headache was even worse and she had blurry vision. Scared that something might be seriously wrong with her, Rachael asked her husband to drive her to FMC’s Emergency Department. As they walked from the car to the hospital entrance, Rachael’s vision blurred to the point where she was unable to see where she was going.

“I barely made it through the front entrance when I blacked out,” she recalls.

Rachael was immediately surrounded by doctors and nurses as she started to seizure. She remembers screaming in pain while her care team worked to figure out what was wrong with her. Unbeknownst to Rachael, she was suffering from post-partum preeclampsia, a rare form of preeclampsia that can develop as early as 48 hours after childbirth – and can lead to serious complications if left untreated.
“I woke up in the ICU and learned that my blood pressure reading – while normal for most people – was actually very high for me,” Rachael said. “I was on the brink of organ failure.”

Rachael remained in the ICU for24 hours, where she was given magnesium sulfate, a medication that can prevent and treat low blood magnesium and seizures in women. She was later transferred to Labor & Delivery for three more days. Once she was discharged, it took several weeks for Rachael to regain her strength.

While it is unclear what causes post-partum preeclampsia, Rachael said she wonders if the stress that she was experiencing at the time may have exacerbated her condition.

“At the time, I had a lot going on – I was a new mom and I also was in grad school,” Rachael said. “I don’t know if the stress of both of those things had anything to do with what I experienced, but I believe it may have contributed to it.”

Rachael said she is grateful that her colleagues at Fairfield Medical Center, including the Emergency Department staff, Labor & Delivery staff, ICU and her obstetrician James Guenther, D.O., were quick to diagnose and treat her so she could get back to her most important obligation – her family. She is now hoping to educate other moms about the warning signs of this dangerous condition; as a nurse, her experience has put her on high alert for signs of post-partum preeclampsia in the mothers she cares for every day.

“Being a labor and delivery nurse, you’d think I’d have known the signs, but I didn’t,” Rachael said. “I don’t want another mom to go through what I did.”