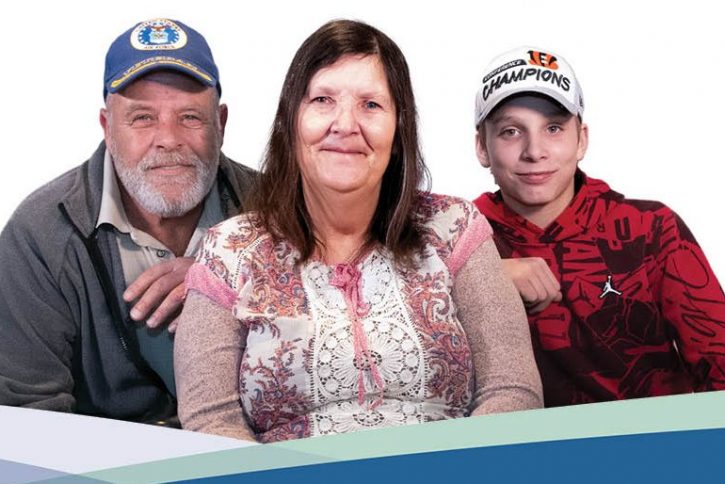 Deb Gilbert, 57, may move and speak a bit slower these days, but when it comes right down to it, she’s simply happy to be alive. It’s an outcome that was uncertain when her heart suddenly stopped beating one afternoon in November 2020.

For several weeks, Deb had been experiencing brief episodes of fatigue, shortness of breath and an unsettling fluttering sensation in her chest. Amid preparing for a move and all the responsibilities that come with maintaining a household, Deb brushed off these feelings of discomfort. It’s a reaction that can be all too common when life becomes busy: We put our needs last and keep pushing forward. Women, especially, tend to fall into this pattern, sometimes to their own detriment. 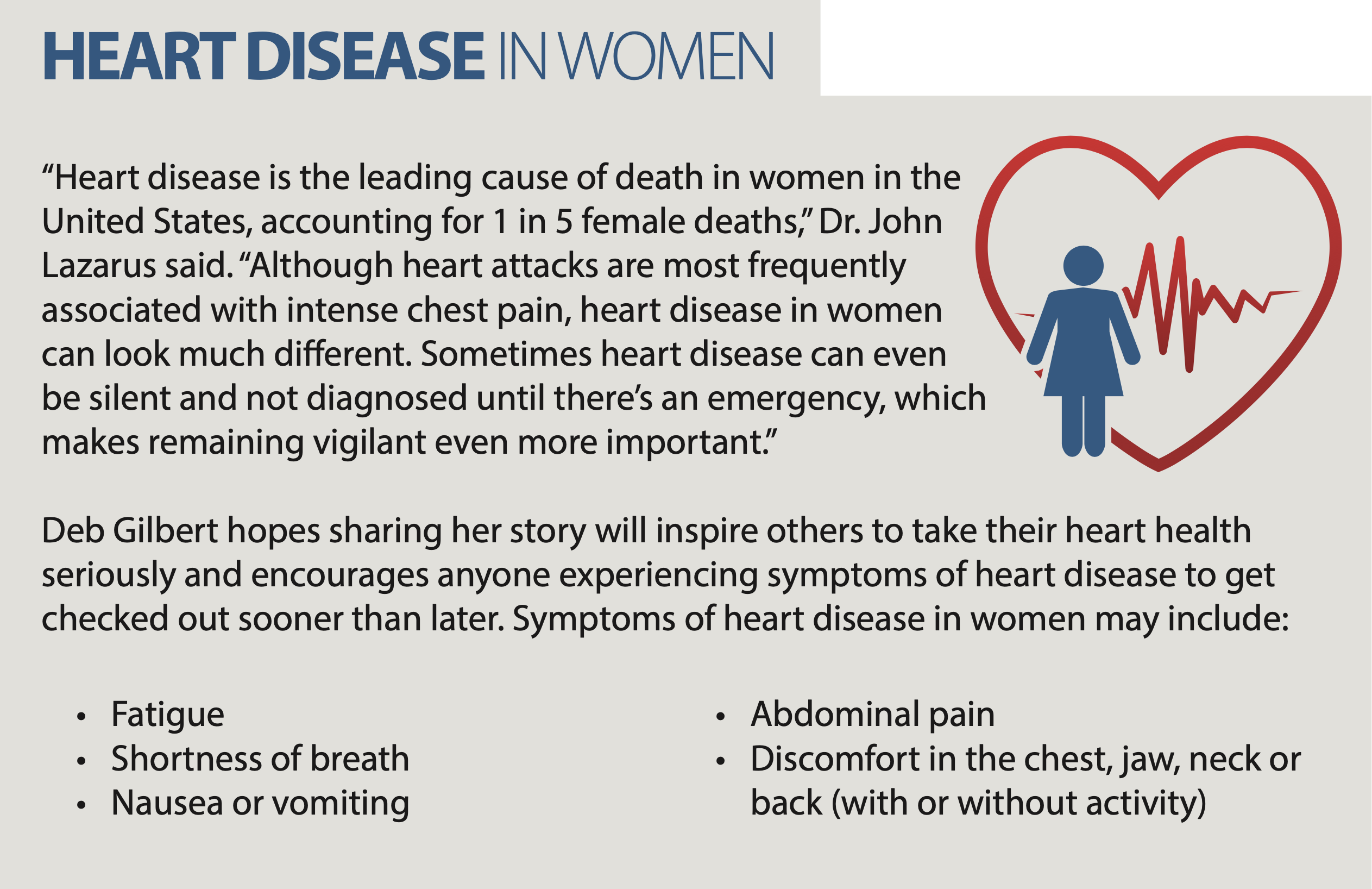 “The symptoms would come and go,” Deb said. “I never had that textbook chest pain you hear about, so I thought it couldn’t possibly be my heart. I chalked it up to stress or thought it might be related to smoking, and then I would move on with my day.”

Looking back, there was one night during which Deb felt strange enough to consider waking her husband, Jerry. But, in true caretaker fashion, she reminded herself that he had worked late and didn’t want to bother him. She waited for the symptoms to pass, and these did – this time.

By morning, Deb felt fine. As she told Jerry about her restless night, he insisted she get checked out. But with no lingering signs
of distress and a busy day ahead, Deb’s stubborn personality prevailed. Ultimately, it would be that same no-nonsense trait that would later allow her to survive and recover.

“Later that day, I went outside to smoke a cigarette, and that’s the last thing I remember,” Deb said, adding that she’s given up the habit for good these days. Her then 12-year-old grandson Traven Miller, however, recalls the day in detail.

His grandmother had been outside for longer than he expected, so he decided to check on her. He found Deb sitting on the patio, slumped forward and not breathing. Thinking quickly, he dialed 911, making the phone call that would save Deb’s life.

“When it comes to cardiac arrest, the chances of survival decline by 10 percent with every minute that passes without medical attention,” said FMC interventional cardiologist John Lazarus, MD, PhD. “Intentional and timely action are crucial. Traven’s awareness and prompt call to EMS were gamechangers in Deb’s resuscitation.”

Paramedics arrived within minutes to begin chest compressions, pushing hard and fast in the center of Deb’s chest to supply her body with oxygen-rich blood. In the middle of the chaos, Traven called Jerry at work to inform him of the situation. Deb’s loved ones quickly headed to the hospital, not knowing what they might find when they arrived.

“When we got there, the staff allowed us to stand in the hallway as she was going in for surgery,” Jerry said. “They were giving us a chance to say goodbye, because we might not get another opportunity.”

In the end, Deb survived nearly 40 minutes of advanced cardiac life support, an emergency procedure to open the blocked artery in her heart, and the two-week coma that followed. This waiting period was marked by setbacks and grave news, but Deb’s fighting spirit continued to shine.

The family was informed that, even with quick action, Deb had suffered neurologic damage due to the lack of blood flow to her brain when her heart stopped. With few signs of improvement in the early days of recovery, they began to fear the worst.

In a determined effort to gauge Deb’s ability to respond to the world around her, Dr. Lazarus leaned close to Deb’s bedside, speaking her name in hopes of waking her from her deep slumber – and her eyes popped open. “Up until that point, Jerry said they had been calling me Debra,” Deb said. “As far as I’m concerned, that’s not my name, and I refuse to answer it. I’ve always been stubborn that way.”

From that point, the road to recovery began. Deb completed several weeks of rehabilitation in an acute care facility, where she began to overcome her brain injury by relearning the basics of controlling her movements and strengthening her body. This foundation of recovery allowed her to move on to Fairfield Medical Center’s Outpatient Therapy Services, where she not only continued to regain strength and balance, but learned how to accomplish daily tasks and adopt tools to support her safety and independence.

“Physical therapy for neurologic conditions takes advantage of the nervous system’s ability to ‘rewire’ and find alternate pathways of communication from the brain to the body,” said physical therapist Elizabeth Poklinkowski. “Deb’s treatment sessions focused on breaking down movements into smaller chunks, then putting those elements together and practicing until she was comfortable and confident.”

Today, Deb is not only surviving, but thriving. “I’ve worked hard to get back to something close to normal. The day I was able to tie my shoes by myself, I cried,” Deb said. “Now, I’m back to cooking dinner and helping with homework and caring for my family – it looks a little different than it used to, but I’m doing it, and I’m grateful to be alive, to be here.”

Deb’s experience reminds us that to care for others, we must care for ourselves, too. Her all-too-common decision to delay medical attention reminds us of the unintended consequences that may await us. And her progress and recovery are a testament to the power of optimism, determination and perseverance.

“I refuse to think, ‘Oh, poor me,’” Deb said. “This all started on Friday the 13th, and when people comment about my bad luck, I make sure to tell them I’m the luckiest person in the world because I survived something that so many don’t. I have Fairfield Medical Center, Dr. Lazarus, the paramedics and my grandson to thank for that.”