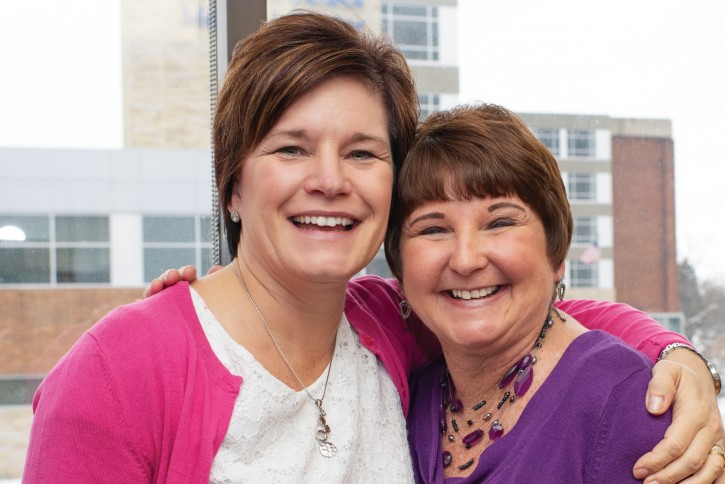 If you ask Patti Hayes what her favorite hobby is, the answer is both simple and selfless – she likes to spend time helping others.

By day, Patti works as the Assistant Vice President of The Peoples State Bank in Thornville but, in her off time, she helps raise money for cancer patients as treasurer of the Perry County Cancer Alliance. Patti understands the financial and emotional strain that many cancer patients face throughout their journey because she’s been down that road herself – twice.

“It’s bad enough to get the cancer diagnosis, but then to have the financial burden on top of it is very hard,” said Patti, who is a breast cancer and skin cancer survivor. “When patients call me and we start talking and they find out what I’ve been through, there is a sense of relief that they are talking with someone who truly gets it.” 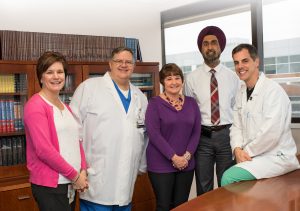 For Patti, her support system during her two cancer battles was the staff and physicians at Fairfield Medical Center. Not only was Patti able to conveniently receive all of her care at FMC’s main campus, she said the compassion and dedication of the staff helped bolster her confidence during a scary and uncertain time in her life.

“Because of my confidence in Fairfield Medical Center, I knew they had everything in control,” Patti said. “As a cancer patient, you are of course worried, but I also knew I was in the best hands I could be in.”

Patti’s breast cancer was discovered in March 2010 during a routine mammogram. Her surgeon, David Hasl, M.D. of Central Ohio General Surgeons, gently broke the news to Patti, then immediately called her gynecologist, Suzanne Barnhart, M.D., of OB/GYN Associates of Lancaster, Inc. who had ordered the initial mammogram.

“When I got home from Dr. Hasl’s office the day he told me, there was already a voicemail on my machine from Dr. Barnhart,” Patti said. “That act of her just taking the time to reach out and offer me encouragement made all the difference that day. That is what Fairfield Medical Center offers its patients – a personal touch.”

In addition to six chemotherapy treatments, Patti also opted to undergo a mastectomy and reconstructive surgery, which was performed at the same time by Jason Lichten, M.D. of Central Ohio Plastic Surgery, Inc. and Dr. Hasl. The combined procedure eliminated the need for Patti to have to undergo two separate surgeries.

“It’s great that Fairfield Medical Center can coordinate across specialties to provide a comprehensive approach to patient care,” Dr. Lichten said. “In this case, I worked closely with the patient’s general surgeon, oncology nurse navigator, oncologist and radiation oncologist.”

The care and support Patti received from her surgeons, along with Oncologist Kanwaljit Singh, M.D. and Oncology Nurse Navigator Shelly Romine, had a positive impact on her recovery. It was that compassion that Patti would remember years later when she came face-to-face with cancer a second time.

In 2018, during her yearly visit with Dr. Lichten, Patti asked him to check a mole on the back of her leg that appeared to be getting bigger and darker. Dr. Lichten evaluated the mole, then performed an excisional biopsy with local anesthesia in his office, which involved cutting out the skin containing the mole. The diagnosis turned out to be melanoma, or skin cancer.

The news was a surprise to Patti – the mole was something she had been watching for a while, but she never expected that it would be something as serious as skin cancer.

Dr. Lichten said Ohio has a surprisingly high rate of melanoma, which can often be the result of patients not fully protecting themselves against the sun’s harmful rays.

“Everyone uses sunscreen at the beach, but many people don’t even think about it on a cloudy day,” he said. “The fact is that the harmful rays break through the clouds, so sunscreen is a good idea every day.”

Patti admits she was not one to regularly wear sunscreen, although that’s no longer the case.

“As a teenager, I remember laying out in the sun all day, but we didn’t know then what we know now,” Patti said.

Based upon her positive first experience, Patti had no doubt that FMC would once again take great care of her. Following the biopsy, Dr. Lichten performed a skin graft procedure to completely remove the cancer. This time, Patti did not have to do any chemotherapy and when the pathology report came back following the procedure, it was clean.

“Once again, my physicians and Fairfield Medical Center took great care of me,” Patti said. “I hardly had any questions through the entire process because they explained everything to me. They knew what to do and they helped me through it every step of the way.”

Through both cancer battles, Patti continued to give back to the patients she met through the Perry County Cancer Alliance, this time with a better understanding of how much that support matters. The efforts of Patti and the committee have been fruitful – in October alone, they were able to provide financial assistance to 40 cancer patients living in Perry County.

Patti also is a member of FMC’s Cancer Education Awareness Committee, which monitors FMC’s prevention, screening and outreach activities and provides support. The committee, comprised of FMC employees and community members, works with outside organizations such as the Perry County Cancer Alliance to develop screening and prevention events that meet the needs of the community.

“Patti is great; my office motto is that we want to be our patients’ long-term partner in health and beauty and Patti is an excellent partner,” Dr. Lichten said.