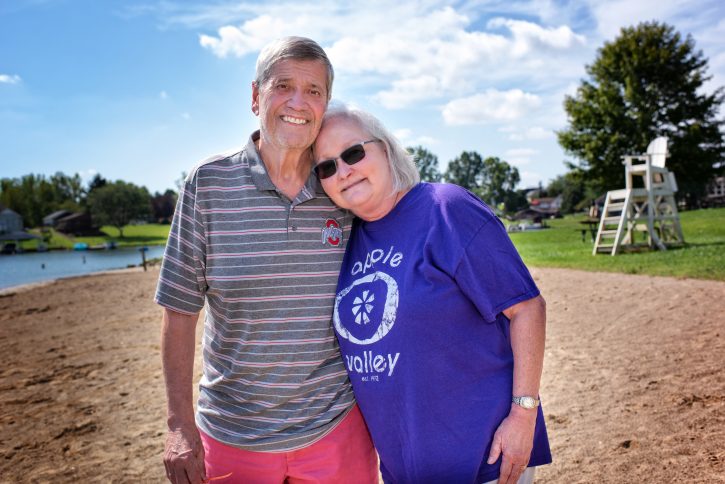 This story originally appeared in the Fall 2019 issue ofThe Monitor.

“If you would have asked me last year whether or not he’d see his 74th birthday, I wouldn’t have had an answer,” said Donald’s wife, Jan. “But he’s a miracle,” she smiled. “Everyone says so.”

Donald, a retired firefighter and Columbus native, was never really bothered by his type II diabetes. “Sometimes I would take my medicine, sometimes I wouldn’t,” he admitted. But after contracting a near-fatal infection, he’s adamant that he doesn’t miss doses anymore.

Last spring, a seemingly normal morning took a turn for the worse when Donald fell suddenly ill. “I was in the car with Jan, and there was a bright light – so bright that I couldn’t see anything,” Donald recalled. “I don’t remember anything after that.”

Suspecting a stroke, Donald was rushed to a Columbus hospital. Once he arrived, however, his symptoms began to change. Initial testing ruled out a stroke – but it didn’t provide any answers. Several hours and multiple biopsies later, it was determined that Donald was suffering from necrotizing fasciitis, an infection more commonly known as the “flesh-eating disease.”

Necrotizing fasciitis, which is caused by bacteria, usually enters the body through an open wound or break in the skin. It spreads quickly, killing the body’s soft tissue as it progresses. In Donald’s case, the infection was the result of a breakdown of cells brought about by his unchecked diabetes.

In a matter of hours, what started as a small, pink rash on the inside of Donald’s ankle had spread across the entirety of his leg. As the infection advanced and more of his tissue became affected, Donald’s leg began to swell and split. Meanwhile, his health was rapidly declining.

Donald was placed on life support and put into a medically induced coma, marking the start of his two-month stay in the ICU. “He was only given a 20 percent chance of survival,” Jan recalled solemnly.

While she prepared for the worst – which included finalizing Donald’s funeral arrangements – Jan tirelessly persevered and advocated for her husband. When the physicians recommended amputating Donald’s leg, Jan resisted. When they began to discuss removing Donald’s life support, she downright refused. “I think I knew in my soul he was going to be okay,” Jan remembered.

“Not many people can say they got to read their own obituary,” Donald admitted light-heartedly.

After weeks of intensive care, Donald’s condition began to improve – but he found himself facing a difficult road to recovery. The infection had left him incapacitated: he needed to learn how to eat, swallow and walk again.

Donald was transferred to a series of rehabilitation centers to regain his strength and ability to perform day-to-day functions.

“The physical therapy team at Main Street Terrace was wonderful – they were the ones that referred us to the Wound Clinic at Fairfield Medical Center,” Jan shared. “And they’ve done a marvelous job: the Wound Clinic is a 20 on a scale of 10.”

“It’s comforting having the same care team for the past year,” the couple agreed. “You just know everything’s going to be fine, that they’re going to take care of you – even when things feel really fragile.”

Donald initially began attending visits at the Wound Clinic on a weekly basis, where the staff would change his dressing and evaluate the best treatment plan for his extensive wounds. As time passed and his healing continued, the staff taught Jan how to care for her husband at home.

Now, Donald only visits the Wound Clinic once to twice a month. Defying all odds, he’s gone from having to be transported to the clinic in a wheelchair to walking through the doors with barely a limp.

“Seeing our patients improve and heal the way Donald has is the most rewarding part of our job,” said Debbie Paynter, CNP. “He and Jan are both truly amazing people.”

Donald still has two small wounds that are in the process of healing, but it’s a far cry from where he was a year ago. As his recovery continues, he has reclaimed a quality of life that he feared might have been lost forever.

“I can drive wherever I want to go now; I can take care of the lawn and socialize with friends – I’m fortunate,” Donald said. “My story has a good ending.” Donald and Jan also have resumed one of their favorite pastimes: camping at Apple Valley in Howard, Ohio.

While the Tinnermanns will be glad to see this chapter come to a close, they won’t soon forget the people that helped make it possible.

“It was our faith, our support system and the expertise of all the medical professionals involved that got us through this,” Jan said. Donald agreed. “A lot of good people got me here,” he said. “I never could have done it by myself.”