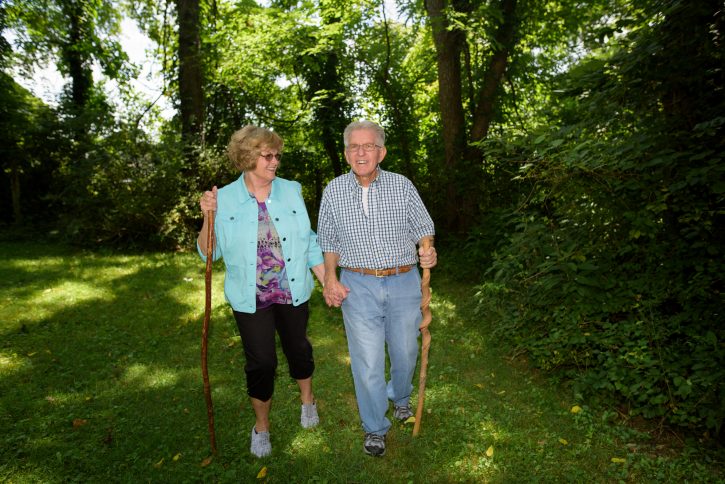 It was Christmas Eve 2016 when Gary, 76, woke up barely able to swallow. He also was experiencing soreness on one side of his body. When he described his symptoms to Margie, a retired lab tech, she insisted he go to Fairfield Medical Center’s Emergency Department for testing.

“They did bloodwork and the labs came back abnormal,” Gary said. “They took some films of my throat and discovered a mass of infection. It was so bad, the doctor couldn’t get a scope down my throat.”

Gary was diagnosed with Ludwig’s Angina, a cellulitis of the neck and chest, and sent home with antibiotics and instructions to come back if his condition worsened. By that afternoon, Gary’s breathing had become extremely labored. By the time he and Margie rushed through the doors of FMC’s Emergency Department, Gary felt as though he was gasping for air.

“I was afraid that he was taking his final breaths,” Margie recalled.

Ludwig’s Angina is an infection of the skin and soft tissues just under the skin. It can progress rapidly, but Gary’s team of doctors at Fairfield Medical Center were quick to act.

“They worked together as a team and saved his life,” Margie said.

Fairfield Healthcare Professional’s provider Andrew Dagg-Murry, M.D. said Ludwig’s Angina is often related to an infected tooth but, in Gary’s case, most likely started out as pneumonia with the fluid around the lungs acting as a source for the infection to grow. The infected fluid is thick and sets up “like Jello” inside the chest, Dr. Dagg-Murry said.
Margie, even with her clinical background, was stunned by the amount of fluid build-up inside her husband’s body. She remembers watching in horror while FMC radiologist Ricardo Barboza, M.D. drained bags and bags of thick, yellowish fluid from her husband’s lungs.

“It was neverending, and if you don’t remove it, it just goes through your body and eats away at it,” she said of the fluid.

While the condition is typically treated with three weeks of oral antibiotics, which had initially been prescribed to Gary, cardiothoracic surgeon P. Aryeh Cohen, M.D. was concerned that treatment might not be enough in Gary’s case.

“In cases like these, the lung infection is so severe that infected fluid can collect in the space between the lungs and the rib cage,” Dr. Cohen said. “This condition is very hard to treat with antibiotics alone; it usually requires a drainage procedure.”

On Jan. 2, 2017, Gary underwent a 4-hour surgery with Dr. Cohen called video- assisted thoracoscopic surgery (VATS) to clean out the infection and help the lungs heal. By the end of the surgery, the majority of the fluid was gone, but Gary was left feeling very weak and unstable.

“A therapy team was called in to help him regain his ability to walk again,” Margie said. “It was like he was completely starting over.”

Gary was released from the hospital on Jan. 18, four weeks after his Christmas Eve diagnosis. While much of his hospital stay remains a blur, one portion of it stands out in his mind crystal clear – the caring and compassionate teamwork of the many different providers, nurses and specialists who treated him.

“Everyone was just on top of it; they kept us informed and answered questions – they were very accommodating,” Gary said. “They took care of my wife and my family, too.”

Margie agreed. “As a volunteer at FMC, I got to experience the staff on the other side of things – not as a volunteer, but as the loved one of someone who was in the hospital,” she said. “I was very impressed; the way that his caregivers collaborated and shared information and worked quickly to diagnose him and ultimately save his life.”

Since his diagnosis, the road to recovery hasn’t been easy for Gary. Two weeks after he was discharged from the hospital, he was readmitted, this time with severe back pain. Doctors found that the fast-moving infection had settled into the vertebrate of his spine, a condition known as vertibral osteomyelitis.

“Haemophilus is a common cause of respiratory track infections; it is likely that Gary had this infection develop and then the bacteria got into his blood and landed in his spine where it set up an infection,” Dr. Dagg-Murry said. “Both Ludwig’s Angina and then a spinal bone infection after it are exceedingly rare.”

Gary was treated for 4 weeks with intravenous antibiotics, followed by oral antibiotics for an additional 3-6 months. He also was seen regularly by Dr. Dagg-Murry during that time. By July 2017, his labs had normalized, allowing him to slowly begin the path to healing once again.

“I still struggle with exhaustion and finding the energy to get back to the activities I once loved, but I’m just grateful to be alive,” Gary said. “While there is a lot I wish I could do again, I’ve gotten into the mindset of being thankful for everything I can still do.”