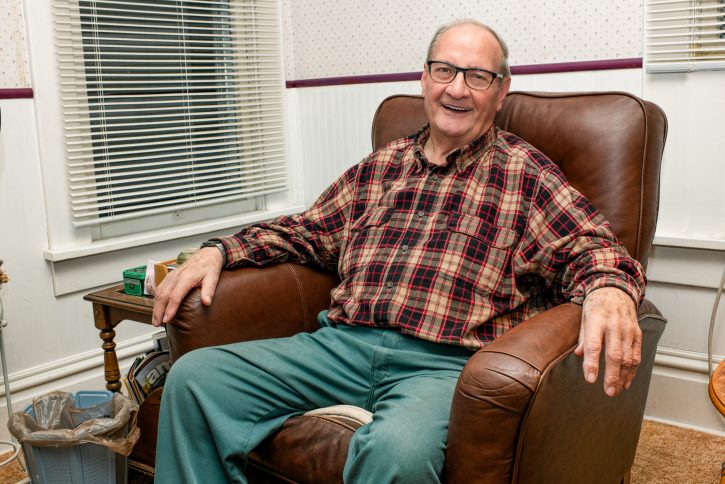 When Robert “Bob” Jones, 86, was diagnosed with a heart condition that would require surgical repair, his care team at Fairfield Medical Center had a lot to consider in regard to his treatment plan.

Bob could undergo open-heart surgery, but his age and other health conditions would put him at high risk for complications – a chance his doctors weren’t willing to take.

Luckily for Bob, there was another less invasive option waiting in the wings.

After years of preparation, Fairfield Medical Center was getting ready to introduce a new technology called TAVR (transcatheter aortic valve replacement) to the community – an innovative alternative to open-heart surgery that could serve as a safer treatment option for many patients. Without hesitation, Bob agreed to be the first to undergo the TAVR procedure at FMC on Nov. 20, 2019.

“I wasn’t nervous at all about being the first patient,” Bob, of Bremen, shared. “I have a lot of faith in these doctors – every single one of them – and I would recommend this surgery and their care to anyone that needs it. I feel like I’ve been given my life back.”

When Bob visited his family doctor to address his arthritis concerns last winter, the last thing he expected was to wind up with a cardiology appointment.

“When the doctor saw how swollen I was, he told me I needed to see my heart specialist right away,” Bob recalled. “At the time, I just thought it was normal – I didn’t realize I was filling up with fluid.”

Bob minded his physician’s advice and attended a follow up appointment with his cardiologist – Michael Reinig, D.O., of Fairfield Healthcare Professionals Cardiology – with whom he had established a relationship several years prior. That was when Bob was diagnosed with a progressive heart disease known as aortic stenosis.

“He told me my aortic valve was narrowing,” Bob recalled. “And that I would probably have to consider heart surgery a few years down the road: he was exactly right.”

Aortic stenosis, which is characterized by the narrowing or stiffening of the aortic heart valve, makes it more difficult for the heart to pump blood to the rest of the body. The disease can go unnoticed for several years, especially among the aging population, but tends to grow more severe with time. As the function of the valve continues to decline, the symptoms associated with the disease can get significantly worse.

“I had severe shortness of breath. I couldn’t walk more than 50 feet without having to stop and rest – sometimes I felt like I couldn’t even catch my breath while sitting in my chair,” Bob said. “And there was the swelling in my legs, of course.”

After listening to his symptoms, Dr. Reinig diagnosed Bob with heart failure secondary to his worsening aortic stenosis. Together, the pair decided it was time for Bob to pursue treatment to replace the malfunctioning valve.

“Aortic stenosis can be monitored and managed conservatively until symptoms develop,” Dr. Reinig said. “But Bob’s heart failure was an indication that it was time to take action, and I told him I would recommend to him what I would recommend for my own family.”

With this in mind, Dr. Reinig referred Bob to Fairfield Medical Center’s Structural Heart Program – a specialty service designed to diagnose, monitor and treat diseases of the heart’s valves, walls and muscles. Here, Bob would undergo additional testing and meet with interventional cardiologists John Lazarus, M.D., Ph.D, and Jason Weingart, M.D., to discuss his treatment options in more detail. That was when Bob first learned about the TAVR technology.

“Open-heart surgery wasn’t completely out of the question for Bob, but he was at high risk for complications due to his age and other health conditions,” Dr. Lazarus said. “TAVR turned out to be a really great strategy for him, and we were excited to be able to offer this procedure as a solution.”

Similar to a heart cath, TAVR can be performed under anesthesia or conscious sedation. During the procedure, an interventional cardiologist guides a catheter to the heart through a small incision, typically in the patient’s thigh. The physician then places an artificial valve within the diseased heart valve, improving blood flow and restoring function to the heart without ever having to open the chest cavity.

This minimally invasive procedure sounded like a good plan to Bob, but there was just one small catch: the TAVR procedure, which had been in development at FMC for several years, wouldn’t be officially available at the facility until the fall.

“Dr. Lazarus explained every detail about the procedure, and told me they would have it all set up in a couple of months,” Bob recalled. “I told them that would be just fine.”

And when the team offered to refer Bob to a hospital in Columbus rather than waiting, he declined. “This is my hospital, right here,” Bob shared. “I knew I could have gone somewhere else, but I didn’t want to. I wanted to be here at FMC, where they’ve always taken great care of me – and it was absolutely worth the wait.”

A NEW LEASE ON LIFE

Since his TAVR procedure in November, Bob’s quality of life has improved immensely, and his symptoms associated with aortic stenosis – including his shortness of breath and fluid retention – have resolved completely. It didn’t take long for him to notice a difference, either.

“I think I felt better right away,” Bob stated – a sentiment that his care team and family witnessed firsthand.

“The night before his procedure, my dad couldn’t walk from one room to the next without being winded,” Bob’s daughter, Brenda, explained. “Three hours after he left recovery, he was up and walking the whole second floor of the hospital with his care team. It was amazing.”

As the days passed, Bob continued to grow stronger, reclaiming the energy and independence he feared might have been lost forever. And within six weeks of his TAVR procedure, after celebrating his 86th birthday and the holiday season, Bob accomplished another feat he never imagined possible: working out three times weekly in the cardiac rehabilitation gym at Fairfield Medical Center.

“I never dreamed I would be able to do this,” Bob said of his newfound workout regimen. “I could hardly get out of my easy chair or go to the grocery store before, and now I’m walking laps and exercising. I don’t think it’s possible for me to feel any better than I do now.”

In addition to his improved physical ability, Bob is finding more enjoyment in his day-to-day life, particularly when it comes to family gatherings and get-togethers – a benefit of the procedure that has not gone unnoticed by his
loved ones.

“Thanks to TAVR and the Structural Heart Team at FMC, we will be able to share more memories with my dad – memories that we might have missed out on otherwise,” Brenda shared.

“This procedure is about so much more than helping people live longer,” Dr. Lazarus added. “It’s about helping them live better.”

And Bob certainly is.