The Monitor magazine from Fairfield Medical Center brings you the patient experiences, the latest news along with health and wellness information you can use throughout the year. 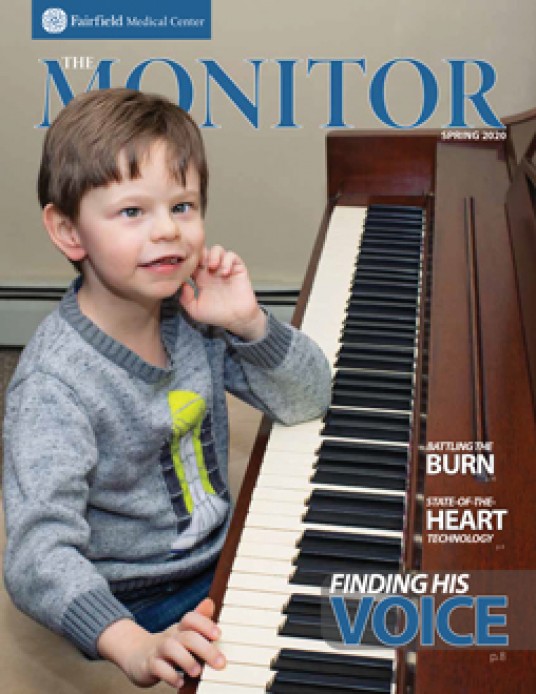 Feeling Fierce.
Lisa Fierce is finally making herself – and her health – a priority after shedding more than 180 pounds following her weight loss surgery at Fairfield Medical Center.

Battling the Burn.
Tired of letting the pain and discomfort of heartburn run his life, Columbus firefighter Kelly Storts turned to the Fairfield Medical Heartburn Center for a solution.

ON THE COVER, Finding His Voice.
With the help of FMC’s therapy team, Josh Claybourn, 7, can now communicate verbally with the world around him. 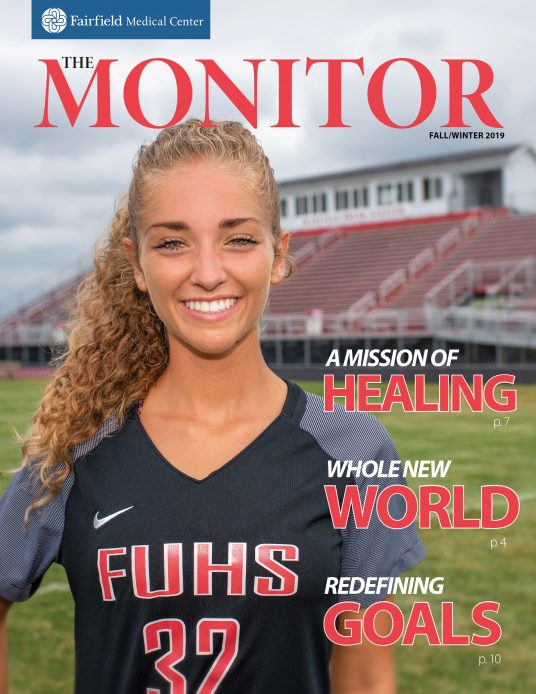 Whole New World.
The team at Fairfield Medical Center’s Wound Clinic worked for over a year with Donald Tinnerman to save his leg from an infection brought on by his uncontrolled diabetes.

A Mission of Healing.
Christine Arni has devoted her life to helping others. When a diagnosis of breast cancer threatened to stand in her way, the cancer care team at FMC helped to ensure that Christine’s mission trips wouldn’t have to be put on hold.

Against all Odds.
While being treated at FMC for his third heart attack, Chuck Snider experienced a life-threatening setback. With the help of advanced technology and a dedicated team of specialists and nurses working around the clock, Chuck made a miraculous recovery and is grateful to be alive. 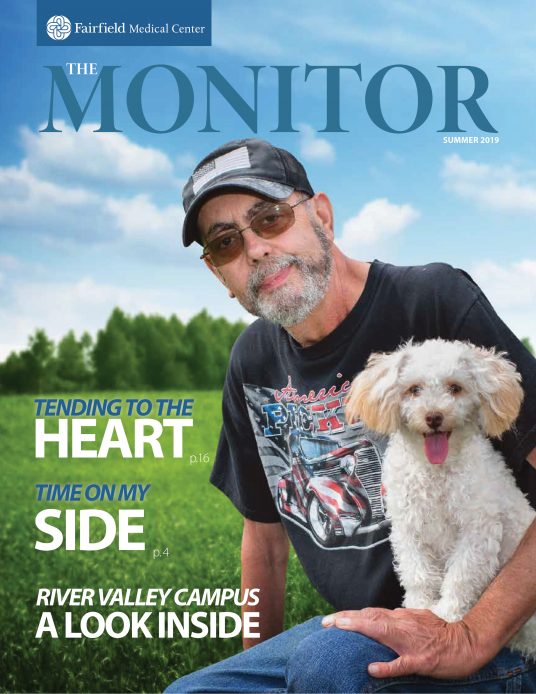 Time on My Side.
Despite a delay in seeking treatment, Jackie Bailey’s care team at FMC and the Ohio State University Wexner Medical Center were able to race against the clock to save her life following a sudden stroke.

Be Your Own Kind of Beautiful.
Years of dialysis treatment left Julie Lindsey feeling self-conscious about the appearance of the access site on her arm. She was told nothing could be done – until she sought a second opinion at FMC.

River Valley Opens
After four years of planning and construction, FMC prepares to open its state-of-the-art community center of medical care and fitness.

A Matter of Trust.
For 20 years, Carla Munsey has put her trust in FMC’s cancer care program through repeated battles of both lung cancer and Hodgkin lymphoma. 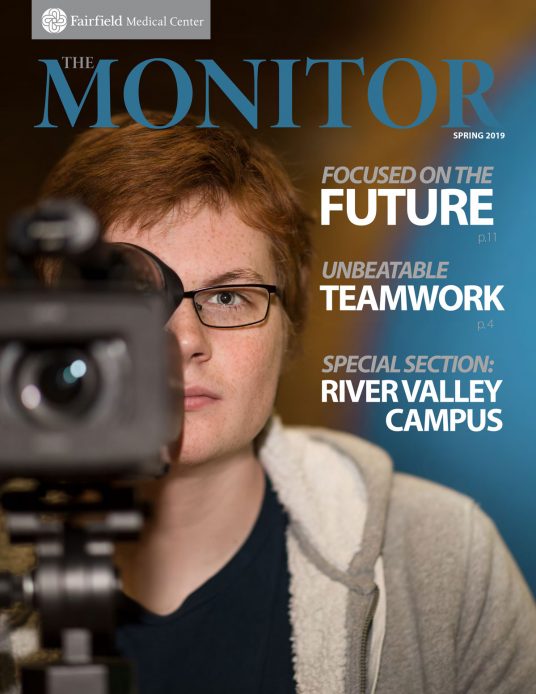 Unbeatable Teamwork.
Patti Hayes beat cancer twice with the help of a team of doctors and nurses who provided a comprehensive approach to her care.

Hearts of Gold.
From the EMS who wouldn’t leave her side to the clinicians who cared for her and her family, Nikki Griffin has one word to describe her experience at FMC: heartfelt.

ON THE COVER: Focused on the Future.
FMC’s Outpatient Therapy team gave Elijah Crum the inspiration he needed to recover from a stroke. 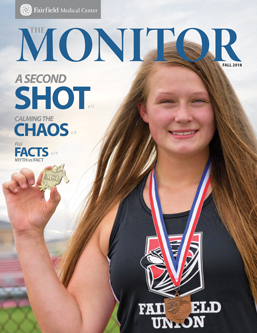 Matters of the Heart.
When Lisa Lipka needed surgery to remove a large cyst near her heart, her FMC cardiovascular team was there to ease her concerns and help her heal.

With Every Breath.
The care and compassion of FMC’s staff kept Gary Swope strong as he battled a rare infection.

Calming the Chaos.
FMC and its Heartburn Center gave Marilyn Stephenson the tools she needed to find relief from acid reflux.

Tough as Iron.
Had it not been for genetic testing, Tracy Simons’ colon cancer may have not been discovered until years later.

ON THE COVER, A Second Shot.
After re-tearing her ACL, Brittany Deval turned to FHP Orthopedics to help her get back on the field. 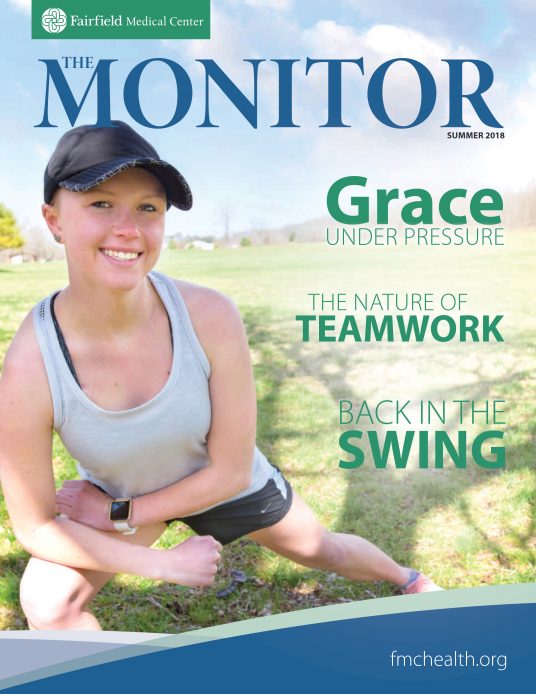 The Nature of Teamwork.
The Outpatient Therapy team at FMC went above and beyond to ensure that patient Tony McGallicher was physically ready to return to the job he loved following shoulder surgery and a neck injury.

Back in the Swing.
Severe back pain was keeping Sondra Kern from her passion – until she met with the orthopedic team at FMC.

Constance is a Virtue.
A unique event at Hocking Hills allows attendees to raise money for local breast cancer patients while embarking on a breathtaking canoe ride and nature tour. 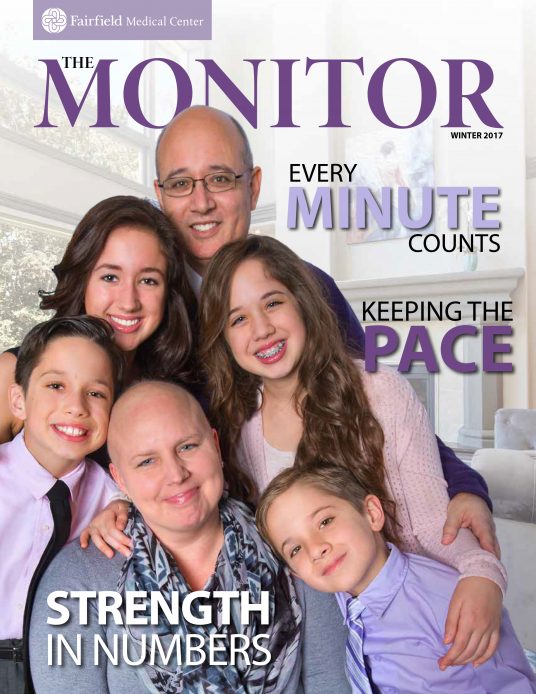 Every Minute Counts.
Rick Cochran and wife Denise Bauer have discovered what truly matters in life after Rick’s near-fatal battle with sepsis.

Keeping the Pace.
When Afib threatened to keep Jay Truesdell from his passion, FMC got him back on track.

ON THE COVER, Strength in Numbers.
Renee Reindle’s family and the staff at Fairfield Medical Center have kept her strong in the biggest fight of her life. 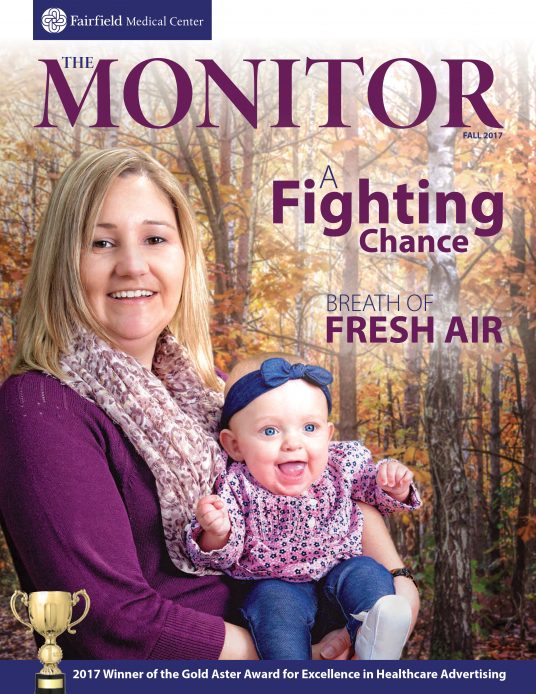 Breath of Fresh Air.
Lung cancer survivor Barney Ankrom didn’t have to think twice when it came to where he should go for his treatment.

The Bright Side of Life.
Retired State Highway Patrol Trooper Larry Jackson didn’t realize how bad his vision was – until surgery made his world a whole lot clearer.

On the Cover: A Fighting Chance.
Teamwork and sheer determination saved Holly and Carley Amerine’s lives – now Holly is educating other mothers about the importance of paying attention to their bodies during pregnancy. 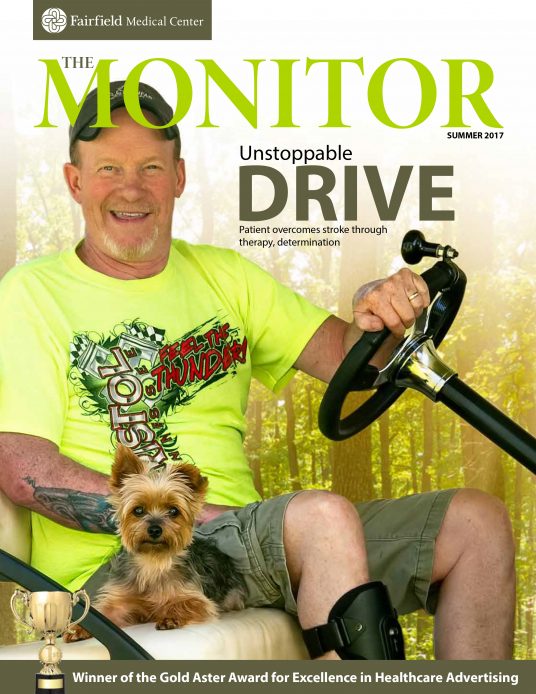 Back on Course.
Hip pain was keeping Mike Diamond from his golf game – until FHP Orthopedics got him back into the swing of things.

The Root of the Problem.
Ron Ramey thought his on again, off-again chest pain was just a symptom of acid reflux – until a trip to FMC’s Emergency Department uncovered a serious cardiac problem.

Surviving the Unexpected.
A week after delivering her first baby, maternity nurse Rachael Hall was back in the hospital with a rare and serious pregnancy complication.

Cleared For Take Off.
When pilot Scott Richardson found himself dealing with a medical issue over a holiday weekend, the First Medical Urgent Care was on call to give him the quick treatment he needed.

A Cause Worth Riding For.
FMC nurse Valerie Shaw, along with her horse, Georgie recently helped raise money for heart patients.

A Second Chance at Life.
Four out of five people don’t survive a ruptured abdominal aortic aneurysm, but Don Dupler was one of the lucky ones.

ON THE COVER, Unstoppable Drive.
Mike Landfried’s unbelievable determination to overcome a stroke that temporarily robbed him of his ability to speak and walk is inspiring other stroke patients. 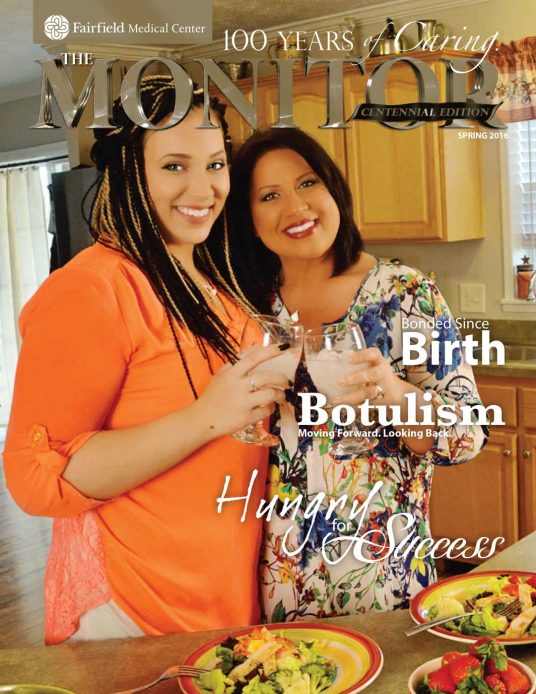 Live to Ride. Ride to Live.
When doctors told motorcycle enthusiast Thomas Phillips that gangrene would eventually take his leg, he refused to accept that fate. Instead, he found hope through Fairfield Medical Center’s Wound Clinic.

Circle of Care.
Thanks to the support of her family, friends and caregivers at FMC, two-time breast cancer patient Sue Blanchard is staying strong in the face of a difficult diagnosis.

I Had FMC and Luck On My Side.
When Sue Able learned that she was living with a fatal health condition, she participated in a clinical trial at FMC to help others in her situation.

Botulism: Moving Forward, Looking Back.
One year after their lives changed forever, the members and leadership of Cross Pointe Free Will Baptist Church look back on the day they will never forget.

ON THE COVER, Hungry for Success.
Inspired by her own mother’s weight loss success, Paige Danner underwent bariatric surgery at Fairfield Medical Center and is on the road to a much healthier lifestyle. 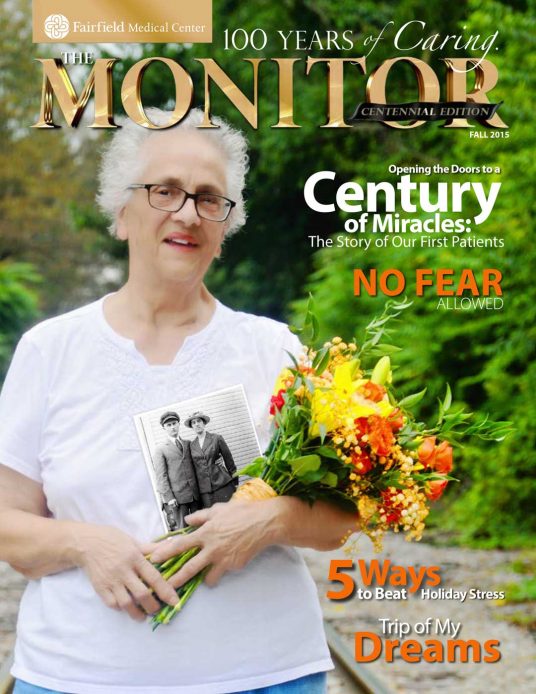 Trip of My Dreams.
A stroke and diagnosis of sleep apnea almost sidelined Susan Bloom’s plans for a European vacation.

Highway to Health.
Committed to getting his care at FMC, Glouster resident Ken Bussart drove two hours round trip every week for cardiac rehab.

Bonding at First Breath.
As the first patient at FMC to undergo a gentle C-section, Amanda Horn had a birth experience unlike any other.

ON THE COVER, Opening the Doors to a Century of Miracles: The Story of Our First Patients
It was 1916 when a young couple involved in a serious train accident became the first patients to be treated at Lancaster Municipal Hospital. 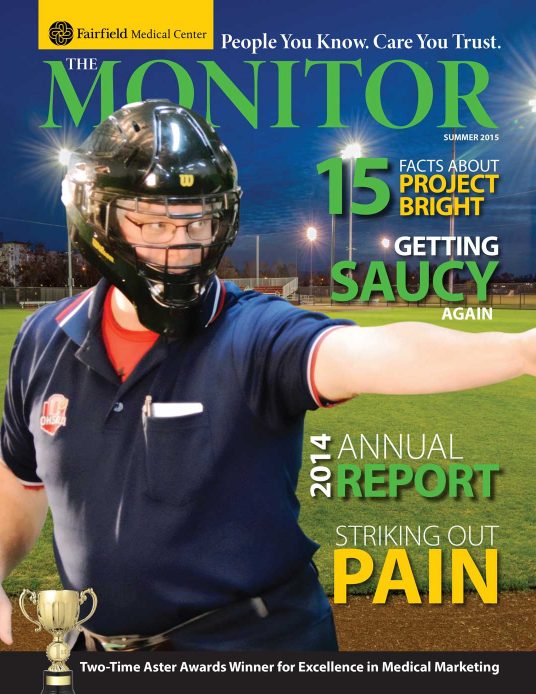 Getting Saucy Again.
Heartburn was keeping Priscilla Fitzsimmons from the food she loved – until she found relief through the Fairfield Medical Heartburn Center.

Beating the Odds.
Roy Nichols may have severe heart failure, but with the help of FMC’s Congestive Heart Failure Clinic, he’s not letting it control his life.

Nothing is Going to Break My Stride.
A recent brush with death isn’t holding Ed Readman back from inspiring others living with heart disease.

ON THE COVER, Striking out Pain.
When hip pain began to interfere with Timothy McGee’s job as a high school sports official, he turned to FMC’s orthopedic program for help.