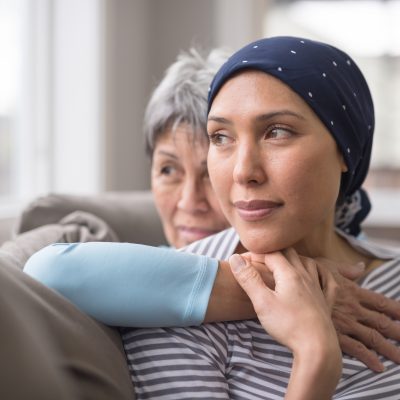 Your doctor will consult with you and determine a suggested treatment plan, possibly different from these general treatment options.

The most common treatment options are:

Currently, there are two surgical options to treat breast cancer:

Radiation therapy is often used after a lumpectomy to help reduce the risk that cancer will return to the nearby lymph nodes or breast area. Radiation therapy uses high-energy rays or particles to destroy any cancer cells. Radiation also may be suggested after a mastectomy for patients with a large cancerous mass, or when the cancer has spread to the lymph nodes.

On some occasions, chemotherapy will take place prior to surgery in patients with larger breast tumors. The goal is to shrink a tumor to a size that makes it easier to remove with surgery.

As researchers have discovered more about the gene alterations in cells that lead to cancer, they have been able to create drugs that specifically fight these changes. Certain targeted therapy drugs have been designed to assist hormone therapy drugs and fight the cancer cells.

In some forms of breast cancer, patients will have cells that produce excessive amounts of protein. The additional protein will cause the cancer to grow and spread more rapidly. Researchers have created a drug that is designed to help these patients and restrict the amount of protein produced.

Bone-directed therapy is designed to lower the risk of cancer spreading to bones. When cancer does spread to bones, it can cause pain and potentially lead to fractures.

Personalized Care That Fits Your Needs